I had grand intentions for the day. Okay, maybe that is overstating it slightly but I did intend to get on with a couple of things. After I read blogs and replied to emails (still not caught up). After I made omelettes for the hungry ones. After I did the ironing. I was going to do 'stuff'.

Instead I got waylaid and ended up lying on the kitchen floor with the girls until we completed the puzzle. It took a while, mostly because it seemed I was the only one actively inserting puzzle pieces in the correct places. 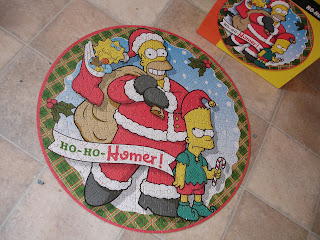 It might be said of today that this puzzle is my only accomplishment other than a well fed family - which is no bad thing at all. I did get out some fabric. The November bee blocks need doing still. I have visions of getting to the post office tomorrow (alone) and posting a myriad of things that need to be sent off, and I thought that if I got the bee block done then that would be one more parcel I could add to the pile.

It is Hadley's turn this month. Some people (I am naming no names here!) finished their block - it is one large block this month rather than two smaller ones - before others even had their fabric! Now that really put the pressure on. Hadley sent all our fabric in a delightful charm square tray that she had made for each of us. I love that touch. 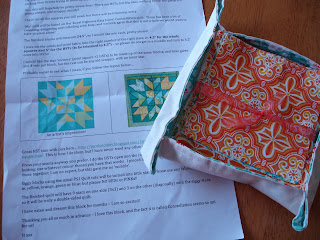 The fabrics she chose are brilliant as well. Lovely contrast with the oranges and the greens and blues. 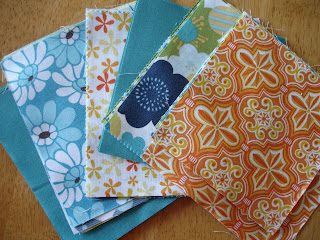 I think by now you probably figured out that I didn't get this block made. No, because while I contemplated my pin cushion and which child did this - 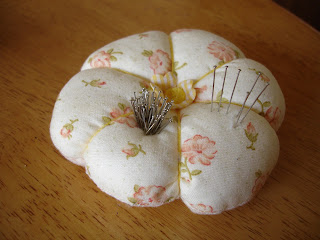 - they, with their innate sense of timing, snuck behind me and started sewing things for themselves. I didn't stand a chance! I'd show you what they are working on - cushion covers I believe. But Blogger just decided it doesn't want to play any more and has frozen trying to load photos. I don't care. The house smells lovely of roasting chicken. Plus there is still birthday cake left.

And tomorrow! Well tomorrow I am going to be alone. All alone. By myself. Not that I am looking forward to it at all. I would hate to give that impression!

Susan
Posted by Canadian Abroad at 14:56