I have been concentrating on the tablerunner for the Modern Christmas Tablerunner Swap the past couple of days so that I could get it closer to completion. Some bits I am happy with and some less so. First of all, I finished embroidering all my snowflakes. 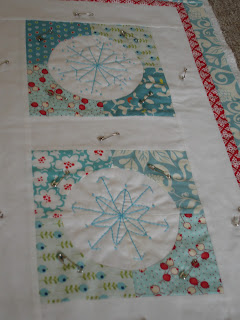 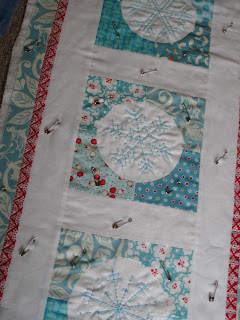 The snowflakes are one of the things I am happy with. I think they came out quite well. That job done, I turned my hand to the backing and completing the piecing of it. I had all the leftover Drunkard's Path block pieces from cutting the front already pieced so I only had to add on the borders. That didn't take too long, and I  measured everything very carefully to try and keep it all identical to the front of the runner.

I then basted the layers together meticulously trying to match up the Drunkard's Path blocks for the quilting. I started quilting, and then I got to the bit that I wasn't very happy with. I kept to simple straight line stitching as I think the snowflakes are supposed to be the bit that catches your eye, not the quilting.


Despite all my careful  measuring and pinning, I did not get the back and front to match up any near as well as I had hoped. I wanted this to be a reversible tablerunner, but I think that it will be less so now. Really, it will only be flipped over when there is a serious gravy spill on the front and then the wonky mismatched quilting on the back will not be disliked so much. 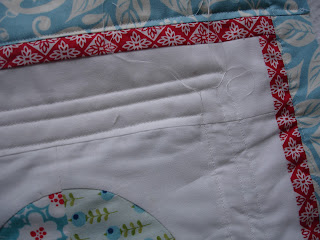 It just isn't as good as I had hoped and therefore I am wishing I had done some FMQ after all - but not so much that I am willing to pick all the stitches out.

I couldn't find my camera when I went to take photos of the quilting. It took some grumping about the house until I stumbled upon it in Emily's room. I forgot she said she wanted me to put some photos of her newest Sylvanian Families on here, because she is quite certain that you would like to see some of what she bought. So here is a small selection. (They are a little dark as Emily doesn't understand about me always having the flash turned off for fabric photos. Sorry!)

﻿
﻿ ﻿﻿
The result of these photos is me realising that Emily is better at staging things than I am. Maybe it would be best if I put her in charge of photography for now on. And if you think the girls are dead spoiled because they have tons of Sylvanian Families (and there is a lot more than what is shown here) I would just like to say in my defence that pretty well all of it was either received as gifts at Christmas or birthdays, or saved for and purchased by themselves. I am just a benign bystander - sort of, maybe - except when I am in the Sylvanian Families shop and then I kind of get sucked into their enthusiasm.