I Have Officially Started

A little later than most years, but I finally started my Christmas shopping. I guess the fact that I am using some of the things I made for presents took away some of the urgency but it struck me this morning - about the time that Helen squealed to Emily, 'This time next month we will be opening presents!' - that I had better pull my finger out and get on with it. So I did. No word of what I bought as someone sometimes reads this blog. I wouldn't want to give anything away.

Stocking up on groceries and searching for the first of the presents took up my morning. Actually, I tell a slight fib. I stopped at the sewing machine shop to purchase some bobbins. The man in the sewing machine shop put paid to the rumour that it is women who can talk your ear off. Very nice man but the only reason I got out of there was because John phoned looking for me, I had been missing in action for so long. I think I listened to Mr Sewing Machine Shop Repair Man's dissertation on sewing machines for about twenty minutes prior to John phoning rescuing me.

One thing Mr Sewing Shop Repair Man did tell me was that they don't sell many Bernina's any more. He said they were not as good value for money as they used to be. He said they haven't been as reliable since they started having them built in the Far East. Huh?! Swiss made, thought I. Not any more, says him. So obviously the first thing I did when I got home was to have a look at my machine. Mine is indeed made in Switzerland. Has anyone else heard of this rumour that the machines aren't as reliable as they used to be? Because I love my Bernina. I have no experience with other good machines so really can't compare. I just know I love the one I have.

It will have become quite apparent by now that I did not spend the day nose to grindstone once again. But I don't feel too bad about it because I got stuff done. And I made a fab tasting - if I say so myself - seafood chowder for our dinner.

I had a few minutes to do a little more sewing after all that and I am almost there with the quilt top. Almost!

I used the architectural print in grey on neutral for the triangle edge pieces. I thought any of the stronger colours would have detracted from other overall pattern of the blocks. I hope I chose correctly. 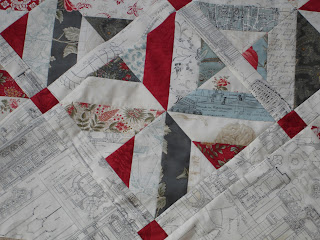 I thought that a little red border might bring it all together. Then I could bind it in the blues and greys, and I have one of the deep red fabrics for the back. Though I will have to piece some extra into that as this quilt is definitely wider than the standard bolt of fabric. I doubt I will get much done on the weekend as there are always too many other things going on, but I can but try.

Susan
Posted by Canadian Abroad at 16:32