Nose to the Grindstone

I can accomplish thing when I have a deadline and a purpose in mind, rather than meandering through my day. Today, despite having an ill husband home, I plowed on with the quilt I started piecing yesterday. To give himself his due, he no longer expects nursing skills or sympathy from me. We have been married long enough for his rose tinted spectacles to be well and truly removed!

Now, I would show you more of my thought process and progress through the day, but have just downloaded my photos to find that, despite beliefs otherwise, I only took two photos today. I blame the man who kept making cups of tea and sitting down for a chat with me. All well and fine but apparently it affects my photography skills.

I finished making the small blocks, and then pieced four together to make a block that measured 11.5" unpieced. I thought about doing the diamond pattern but after my usual ponder decided against it. When I had enough blocks made I laid them out on the only available big enough space altogether. I didn't like them right next to each other. It was too busy with these fabrics. I think I would have had to have had some white strips in to relieve the eye some.

So I pulled them all slightly apart from each other, on point like this. 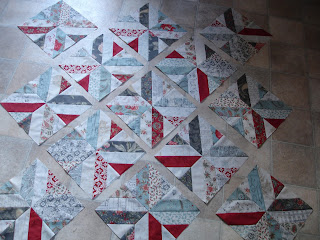 And then I drove to the quilt shop, leaving these on the floor of course, and bought some more fabric for backing and for sashing and cornerstones. And that is what I have been doing ever since. Cutting and sewing. All work and no play is turning me into a dull girl. I shall have to have a wee mishap or two along the way so I can get entertaining again. As of this moment I have managed to sash over half the blocks. I am pleased with the way it is looking. 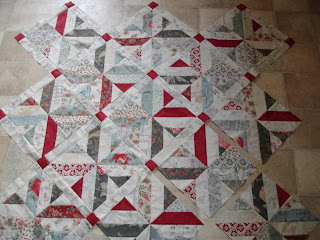 Oh, there was this. A small warning for those of you who give their finger a very light lick when trying to abut seams and such when you piece things together. Do not ever try to dampen the end of  your finger while holding a pin. Really, do not do this. Trust me, it hurts!