Nosey Parker in the Neighbourhood

There is a new linky party and I am jumping in and joining in. For all of you who don't know Kat - Diary of a FlutterKat...  actually is there anyone who doesn't know Kat? This is her linky party and it will let you nose around lots of blogger neighbourhoods. Let you find out what it is like where they live. This first month it is exactly that, introducing your neighbourhood and neck of the woods. If you want to learn a bit more about me, read on. If you want to learn a bit more about lots of others then please follow the link.

When I am not online, I can be found here -

My blog name is a dead giveaway that I am not from the UK. I am an import from Canada. We (me, my husband and two girls) live smack dab in the middle of England. Just try to get a spot that is as far from the sea in any given direction and you will find us. I was a suburban girl plopped in the middle of the countryside. It was hard at first. I used to email friends in Canada and complain that you could hear cows when you were in the garden. I got used to it - eventually. That garden then has nothing on the one we have now. Here the cows are so close they sound like they are actually in the garden some days! Cows can be loud - really loud. I mean loud in a psychotic way at times.

Don't get me wrong, I like where we live. We live on the edge of a village. Cows over the hedge behind us and sheep in the fields across the road. Our house is a bog standard brick detached built less than ten years ago. It looks like lots of red brick houses but it is a good house, a roomy house, and our home. If you walk around the corner you come to much prettier houses built of Northamptonshire stone. It is these houses which abound in the villages all round that make the area so pretty.


The village grew as a train depot for the Great Central Railway back before all the cuts in the 1960s. In earlier days it wouldn't be cows I would have heard when I went outside but steam engines.

In retrospect, cows aren't so bad! The occasional steam train would be okay too, but constantly, um, no thanks.

Close to us there are two favourite places I like to go for a walk. The first is the reservoir, which was built to provide water for the Oxford Rugby Canal. 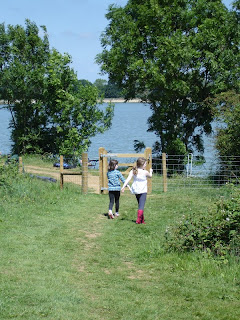 Then there is the canal itself, which always provides a pleasant walk, often people to talk to and fun for the kids. 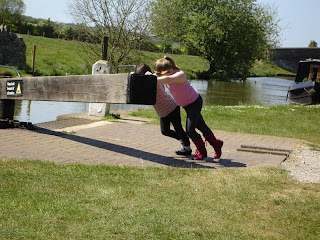 If you venture further afield from here you will find some of England's most famous places within a 45 drive.

﻿
﻿I could go on, but I think you are getting the idea. We may live in the middle of nowhere, but we also live within reach of some of England's greatest treasures. If you come visit us you will not get bored!
To get around you need a car. While not absolutely necessary in some respects as there is a bus service, I need to drive the girls to school because they go to one two villages over (long story). I think the most common type of vehicle driven around here is a four wheel drive, with Landrovers being predominant. That's what we drive, two old but reliable Landrovers. The closest main town is Banbury which is 12 miles away. Banbury is most famous for a nursery rhyme.
﻿The closest thing we have to a local delicacy would be Banbury cakes, which is a spiced, currant-filled, flat pastry cake similar to an Eccles cake. If you want the most common food of our village then it would have to be a curry as there are two takeaways here and they are the sum result of what you can have delivered. No pizza takeaway, Kat, you would hate it!

If you have questions, feel free to ask. I hope you enjoyed your wee tour of my corner of the world. I can't wait to see what Kat is going to make us divulge next month!

Susan
Posted by Canadian Abroad at 10:18