Laughter is the Best Medicine

I am all over yesterday and the funk I was in. I am over it because I have such a wonderful family. Don't get me wrong - I am sure to have a moan about something in no time at all. But when push comes to shove, my family sticks up for each other and makes an effort. So yesterday himself was wonderfully supportive and appreciative. And after he had to leave for the week, the girls went out of their way to make me laugh until it hurt.

First it was them using a flashlight and my iPad for music and then doing shadow dancing. It probably had to be seen to be appreciated but either one of them might have a future dancing on a podium - though I hold out for higher ambition with fingers crosses. They then decided to teach me to use the Wii and master Mario Cart. It is just like driving a car, they told me. I hate to break it to them but it is so not like driving a car! I have never, ever driven off a cliff repeatedly since I got my licence. I am totally hopeless at virtual driving. It was pure comedy them yelling instructions, me driving into or off of cliffs, and them still telling me how well I was doing! Good clean fun.

Afterwards I slept like a log. That was good too! Needed it badly. And today is a new day. I was going to clean (seriously - housework!). Was being the operative word here. After taking them to school I settled into breakfast and emailing. It might be sad but it was so good to sit and reply to emails and chat to people. To relax! You would think I had been away for months the way I felt, but it was good to be back. I have tried to reply to all of yesterday's emails and a few more, but if you don't mind I probably won't delve deeper into the archives. I think I shall just look forward and try to stay on top of all future emails and comments and will just have to write off ones past as a failure on my part. Sorry!

Having enjoyed that interlude I went about putting the seats down in the car and stuffing the car full of things to go to the tip (or the dump as Rhonda reminded me it was called on that continent I used to live on). I had just shoved in the last item when the phone rang. It was the school and could I please come and pick up Emily as she was not well. I looked at the car. Okay, I decided that Emily would have to come to the tip with me as I wasn't pulling all that stuff out again, so I put her booster on the front seat.

By the time I got to the school Helen had joined the queue to leave. That posed a problem. One seat available and two children to take. Bless, Emily said that Helen needed me more because she was crying so I could take Helen and she would be okay as long as she knew I would come back for her as soon as I could. Off to the tip with one poorly and unhappy child, and back to the school for the other.

Not quite what I planned for the day, but that's okay. They were here for me yesterday and I am here for them today. I wonder if they would be up to another round on the Wii and whether laughter would help them as much as it helped me? 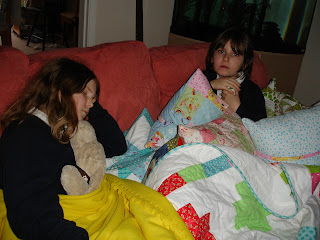 I think they could use a little cheering up, don't you? And yes, they have requisitioned just about every cushion they could get their hands on. I am going to have to detox those!

Susan
Posted by Canadian Abroad at 15:49