The Very Middle of England

I thought that it would be hard to rhapsodise about our little corner of England as today dawned dank and foggy. After all the sunshine we have had of late I finally felt vaguely normal again and Emily was back to school, so my Dad and I were free to go out and play and the sun wasn't. Hummff! How unfair, thought I. But in actual fact, going out into what I thought was a damp and dismal day, I was proved wrong.

We live in the middle of England. Honestly, look at a map of England and find where you think it is farthest from the seaside in any direction and you will find us. I miss the sea/ocean/really big lakes. Being near water makes me happy. I guess that would be my one big complaint about where we live. It is too far from proper water.

But we do have water of a different sort. Winding, peaceful, useful water. Water that transports people. Water that provides a character to our countryside that I think is uniquely English. We live a short distance from the Oxford Canal. It is a canal for narrow boats. Not those big old (lovely) canal boats that I hunger to travel on through vineyards in France, but narrow boats are exactly what it says on the packet - narrow. On average about 6'10" wide (2.08m). This is so they can traverse the locks which can be as narrow as 7'. They have an appeal of their own, though I would still prefer France and the vineyards if truth be told.

You don't have to have a narrow boat to enjoy the canals though. Canals are wondrous places to bring young children and as they grow the joys of the canals change. Little people evolving into medium people can 'make themselves useful'. It's true and I proved it today because my father found it equally entertaining as he assisted boating people at the locks. Opening and closing locks can provide hours of fun and entertainment - if you let them stay that long. Unfortunately for my father I made him take me for lunch after a while. I think he would still be down there otherwise. Look, here he is helping - 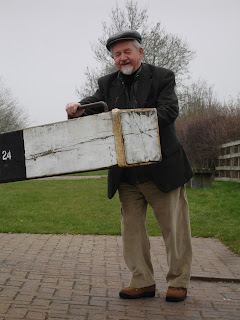 Isn't he the quintessential English country gentleman? Tweed jacket, flat cap, all the necessary accoutrements. Born and bred in Yorkshire until the age of 14 and since then has lived in Canada for 64 years but he hasn't let go of his roots - bless him.

I thought that the weather would put paid to any half decent photos but it didn't turn out as bad as expected. Rather than looking gloomy it looks peaceful and so quiet - which is exactly what it was. The odd baa-ing of a lamb, rumble of a tractor, and so forth - but no traffic noise or other intrusions. 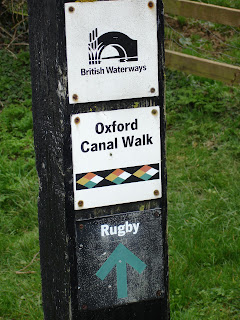 Very kind of them.

There were a few boats going this way or that, but not the queues that you can get at the locks in the summertime. Just enough boats to allow for some photo opportunities. 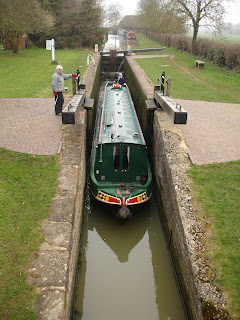 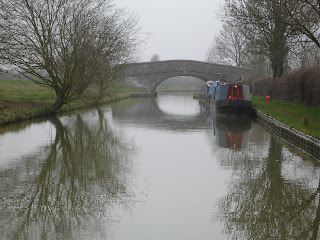 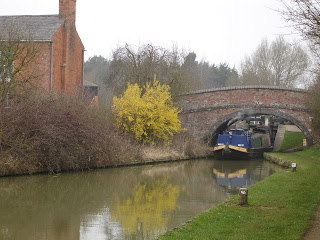 A relaxed lunch at the pub followed our walk. I shall fore go telling of the frenzied photocopying for the Easter egg hunt coming up in a few weeks, or the joys of a grocery shop in Tesco, for I don't wish to spoil the illusion of a perfectly idyllic day untouched by the demands of every day life.

Susan
Posted by Canadian Abroad at 19:18