The Chocolate Flapjacks are finished and there will be two extra girls for dinner here tonight. That meant baking. I can go without dessert without a qualm but when the girls have friends around I always like to produce something nice after the main course. It strokes the ego when young voices express their appreciation.

I flipped through my recipe box. Great recipes but it is always my first port of call for baking. Felt jaded about the same old things today. I looked at my cook books - I shall tell you about them at some later date - and I grabbed the very first cook book I ever bought myself off the shelf.

I don't think that it was my first ever cook book. My mum gave me that. A wonderfully useful edition of the Good Housekeeping Cook Book which is a staple here in the UK and has everything you need to know about everything for someone starting out in cooking. It was so good in fact, that my brother nicked it! Can't say that I blame him though as in my life as a nomad he has taken the role as the person who has stored my things for years at a time, repeatedly. A cook book was a small price to pay.

When I no longer had that book to rely on I went out and bought the North American equivalent - The Fanny Farmer Cook Book. 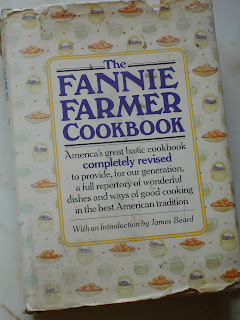 As you can see, it is showing it's years. A sign of a well used cook book, say I. What good a pristine cook book that you are afraid to have in the kitchen environment?

So I sat on the floor - as you do - and perused my book, finally landing on this page - 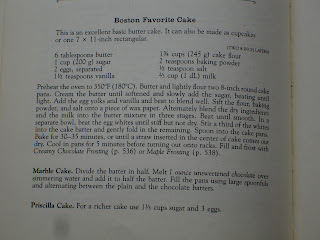 ﻿So that's it, today's recipe sorted. A Boston Favourite Cake. Not one to do things by half I went with options two and three listed below the recipe. Marble Cake - always more fun than a regular cake. A richer cake? Well it would be silly not to.
What a faff!!
If you don't have a dishwasher (like I don't) then brace yourself, this one will have your hands in the suds for a good long while after the cake is placed in the oven. Bowl for beating the butter and sugar, and adding the other ingredients. A bowl for the dry ingredients. A measuring jug for the milk. Then another Kitchen Aid bowl for beating the egg whites that have been separated from the yolks - involving yet more (smaller) bowls. Good thing doing dishes doesn't bother me too, too much!
So I beat and I mixed and I folded in. And then I had two batters. 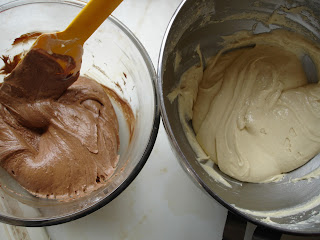 I delicately whacked alternating spoonfuls of batter into the pan, and then drew a skewer through several times - 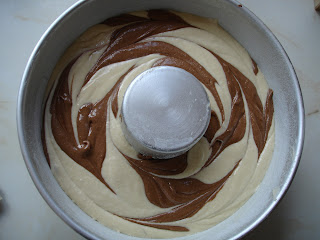 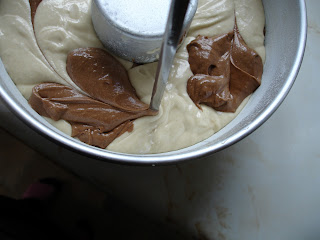 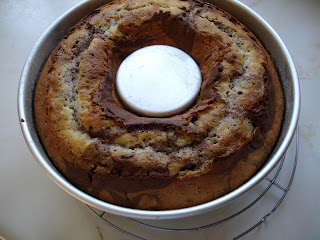 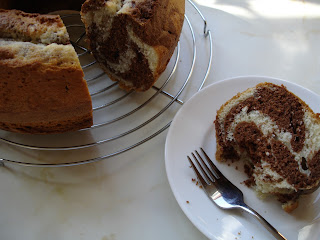 Well, it would be rude of me not to make sure that it was up to par before I served it to anyone else - wouldn't it?! It might be a faff to make but this cake is fantastic. How many people make marble cake any more? Time to change that. Good old fashioned recipe from a book that was first published in 1906.

So cake made, and pasta sauce too. Laundry put away. Quick trip back to the school to remove a (rather large) splinter from Helen's finger - because school aren't allowed to do these things any more. Who makes these rules? Please!! But splinter was duly removed, finger cleansed and plaster applied (band aid for the North Americans amongst you).

Now it is my time to play. Not a lot of time left before school lets out but what time there is is mine. Fabric, here I come.

Posted by Canadian Abroad at 14:40