Mondays are alright for cuddling up to sick kids. Good excuse for ignoring the long - ever existent - list of 'things to do'. The things to do will still be there tomorrow but my sick kid might be all better and back at school and no longer in need of all day hugs. Together we learned some things on kids telly. Like how to power lights with lemons. And what substances chocolate sticks to more and why (sharing electrons, just to prove I was listening to the presenter). How tarantulas build their nests and that a certain type of South American bat uses leaves to form a tent to sleep under. Who says all kids television is bad?

So there isn't a lot to show for today other than my extended knowledge of things I never knew I needed to know but enjoyed learning anyway. Emily did do a little crocheting in her fragile state - 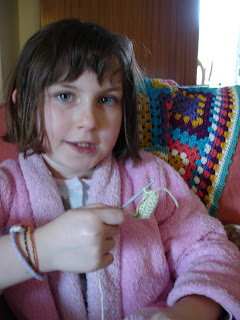 And so did I. I started using the soya cotton blend yarn and it is lovely - soft, very soft - but a bit of a pain to crochet, in that the strands have a tendency to split. I would still buy it again though. Once you get in the swing of things it isn't too bad and so what if occasionally you have to take out a stitch and redo it because the yarn isn't cooperating. No big deal. 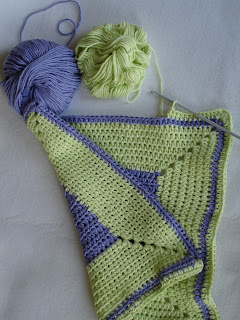 On my dining room table lie 25 sheets of paper with egg outlines on them. My Easter Egg Hunt project for the PTA has started. I am looking at it logically and think I have reduced the amount of work as much as I possibly can. It doesn't seem so daunting now. And with luck there will be a chocolate egg (or two) leftover from the hunt which I will consider well earned and mine. Due to there being no school in April - oh, okay, slight exaggeration but not by much. There are only eight days of learning on the calendar for that month. Therefore we will be doing our egg hunt at the beginning of April, long before the bunny is out delivering chocolate to individuals in their homes. Spreads the sugar consumption out evenly across the month.

I would like to talk about more exciting things but being housebound for several days in a row for whatever reason means that there really isn't anything to tell you. I have been thinking that I need to get out there with my camera and show you what a beautiful part of the world I live in. I'll add that on to my 'list of things to do'. It is lurking somewhere waiting for me to act upon all items written there.

Susan
Posted by Canadian Abroad at 16:26