Nothing Wrong With a Little Rain 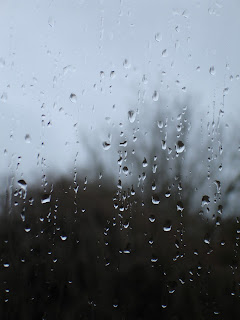 To quote the Cat in the Hat -
The sun did not shine
It was too wet to play
So we I sat in the house
All that cold, cold wet day
It was a shame really, because it meant that I had to sit in the house and sew, and crochet, (after accomplishing the necessary stuff) and not have one ounce of guilt because I wasn't ignoring a beautiful day. Ha! Sometimes you just have to love rainy days.
About the necessary stuff I had to accomplish. I went to the grocery store with two things in mind that I definitely needed. Two. That was it. So why did I come out with £80 worth of groceries and then realise once I was unpacking all that stuff at home that I forgot one of my two items?! I know I am not the only fool person who does that, but it doesn't make me feel any better when I am looking for the yogurt to marinade the chicken in. I got round having to go back out into the rain though. I cannibalised one of John's fruit corner yogurts and helped myself to the yogurt, leaving that corner of fruit intact. Wasteful? Probably. But it fulfilled my needs. Dinner was sorted and I could get on with the really important stuff. Sewing. Woohoo!
And it has been a fruitful day. I managed to accomplish this - 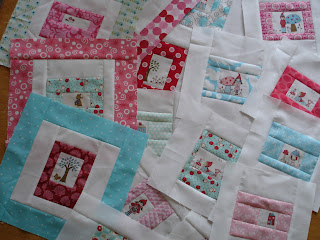 That mess of squares translates to twelve fussy cuts that got their charm square (5" square piece of fabric for the non-quilters reading me) cut and sewn on. Then all those have their plain white border. Additionally, four squares are complete with their contrasting colour border. I'm well on the way to a quilt top now.

The great thing about winging it and making it up as you go along is I had (what I thought was) a really good idea while piecing today. Something different to do when I am putting all those squares together. Just a little thing, but the idea made my brain go 'yes!' so, for me, it is a good idea. For you? Well, you can judge for yourself - when the quilt top is done because I have absolutely no intention of telling you what on earth I am dreaming up now. And, actually, it is a very very small thing. And I am easily pleased. So don't get yourselves too excited.

All quilters know that maths is a very important part of knowing what to cut. Simple maths, but maths none-the-less. I get it wrong a lot - despite being pretty good at maths. But I did learn something when I made up these blocks. What I learned is this - it doesn't matter what size the fussy cut in the middle of the charm square is, the end result when you have cut and sewn on the square will measure 4"x5" (if you use the traditional 1/4" seam allowance). Duh - now that I have sewn them it all makes sense but there is not a hope in hell I could have told you that before I started.

So tomorrow this stack - 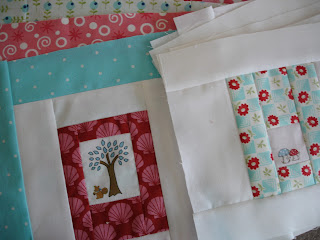 - will be complete with borders and ready to start sewing together. Keeping in mind that I have about 200 pieces of A4 paper to laminate tomorrow. That won't take more than a moment - will it? Nah, I'll have plenty of time for me. I have faith (she says with all fingers and toes crossed).

Susan
Posted by Canadian Abroad at 17:57