It has been a grey old day. I even contemplated putting the heat on briefly this morning as there was a distinct chill in the air - but I refuse to do that in May so I kept my jacket on for a while after the school run. Rain dripped down most of the day and there was the odd rumble of thunder but, disappointingly, no proper storm. I love a good thunder and lightening storm.

So I did a little of this and a little of that. Gave some attention to the house. Not much but enough to convince me that I earned some sewing time. I finished doing my loopy loops on the Pips quilt. I quite like the effect they have but I don't think that this photo shows them off very well. There are too many shadows and it looks as if the quilt is all wrinkly and crinkly already. 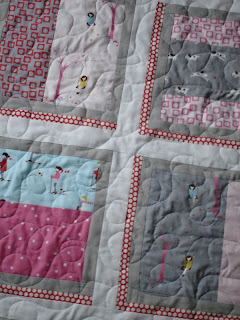 I may try and get the binding cut tonight. Instead of doing the binding after I finished quilting the Pips I did a little more FMQ on my mini quilt. The birds are all done now - other than the fact that I just looked at the photo and realised that the two flying birds don't have the little curlicues on their heads - and I sewed the lines that I am going to put the music notes on. 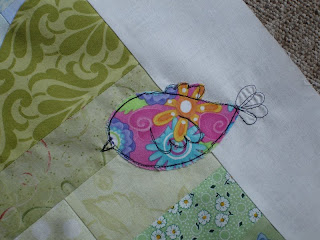 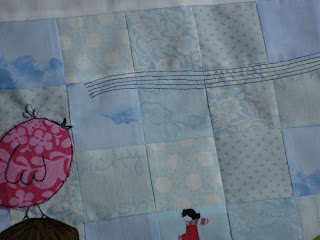 The highlight of my day - so far. Making a swiss roll. Why? Because it is dead easy to make and with no one else home someone has to eat the off cuts. Me, me, me! 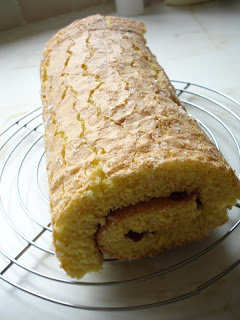 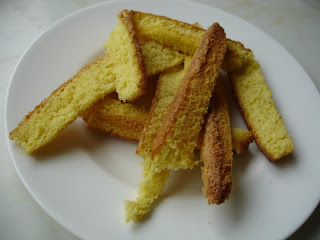 I have a bonus child here now so I had best sort out the pasta sauce and make some changes to the sewing dining room so they can actually sit at the table. Maybe get the fabric well away as an accident with bolognaise sauce would be too ugly to contemplate.

Susan
Posted by Canadian Abroad at 15:57