My Machine Has Been Swearing At Me!

On the premise that when you hear a *bleep* on television you know that a swear word has been covered up, I can only surmise that my sewing machine has spent the best part of the afternoon swearing at me. How rude! It has just been beep, after beep, after beep. We shall not discuss that my machine makes that sound when you are going too fast with the FMQ. That is completely besides the point.

To everyone who left a message yesterday, and to those who didn't, thank you for your kind thoughts. I am feeling a lot better for a day of rest. It is unusual for me to be so knocked sideways by somethings as normal as a cold and I do believe I am just about normal again - or as close to normal as I have ever been. But I appreciate your sentiments.

The hardest thing about yesterday, relaxing, was not the doing nothing. I got quite into that groove and think I could grow to like it. No, it was the staying off the computer as much as possible. Blogs, Facebook, all that thing - you don't realise how much of your day can be taken up with 'quick checks' until you deny yourself. Probably did me quite good to have the reality check!

Today it was back to normal. Even doing housework. (shhhh! Don't tell anyone!) And also back to my (very rude) sewing machine.

I was surprised to receive the backing fabric that I ordered from The States only last week. It landed on my doorstep yesterday. There was no longer an excuse to avoid pinning some of my quilt tops. To break myself in gently first I decided to do the Double Fat Jack. A search through my thread produced one that matched just about perfectly. The fact that I think it is hand quilting thread and may even be waxed was ignored. It worked a charm.

I went with a very simple pattern for quilting the flag and stuck with straight lines and my walking foot. I also used this doohickey (don't bother telling me the correct name because I won't remember) for the first time - 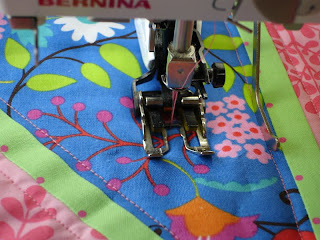 Well, doesn't it just keep you on the right path. I wish I knew what I know now five years ago when I began quilting. (Maybe I should have read up a little more about it before I jumped in feet first!) Either way, Fat Jack is quilted, simply and sparingly and is headed towards becoming a pillow (when I buy some more fabric for the backing). 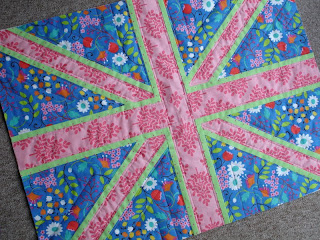 With the flag moved on to the next step I chose one of the Pips quilt tops to layer up. Then I was in pinning hell. Is there anyone out there who actually enjoys the process of joining the backing, to the wadding, to the quilt top? I mean really! But I did it because it is a necessary evil. 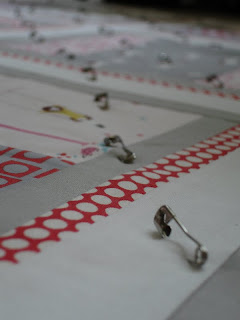 Then I set up my machine for FMQ - and that was when the swearing commenced! I have decided on a looping pattern for the quilting, thinking that it was sort of like the path a child on a scooter would take - or a puppy - always the indirect one. I am about a third of the way through the quilting. The bobbin just ran out. I took a deep breath, and thought now would be a good time to write my blog. I'll do some more tomorrow. 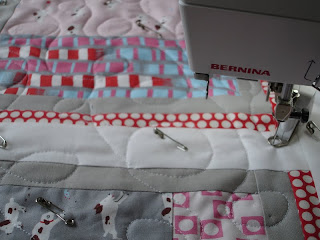 Susan
Posted by Canadian Abroad at 16:16