Moving Forward At A Snail's Pace

I don't have a lot to report on the crafting front. Saturday is not a day that lends itself to creating much. That's okay. I am lucky to get a good deal of time during the week to do my own thing. I can tell you that I have started on another of my PIF gifts. I actually followed a crochet pattern for this one! Now that is a first for me and was in fact easier than I thought it would be. I am about a third of the way into the project. This is what it looks like at the moment - 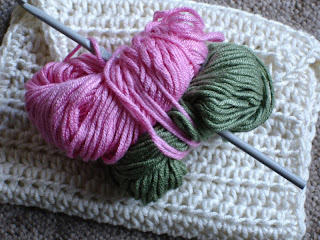 I have not been near my sewing machine all day. But I have had a little look around our garden, pulled a weed or two, continued with my quest to rid my herbs of the dandelion invasion and proudly taken a photo of our mini potato crop as it springs forth. We grew our own potatoes a few years ago and I was amazed at how much better a potato fresh from the ground could taste. I never equated potatoes with having a 'fresh' taste but I learned something by growing them. The last few  houses we have had have not had gardens that leant themselves to a veggie plot, but this year the girls came home from school with three seed potatoes to grow on.

We considered using grow bags for them but when I priced those up at the local garden centre I was astonished to find that they were selling them 3 for £10. John came up with a better solution. When we moved in here we found we had twice as many recycling boxes as required. They are a good size, have ready made drainage holes in the bottom and two of them were surplus to requirements. Not any more. They are proving to be very good potato plant homes. 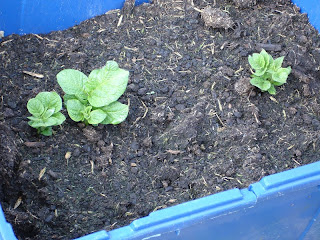 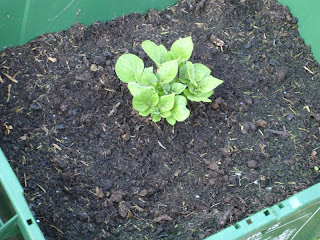 I have told the girls to leave all that space from the top of the boxes so that we can add more soil as the plants grow to increase our little crop.

Last month, there abouts, I showed  you a photo of these Double Decker Brownies - 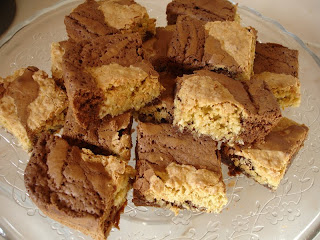 I had said that if anyone was interested in the recipe to let me know. Some well two of you expressed an interest, and in the theory of better late than never, here you go. Double Decker Brownies -

Mix flour, b. powder and salt.

Beat sugar and eggs until pale, Blend in melted butter. Fold in flour mixture. remove 1/2 cup of the mixture to a smaller bowl and add the coconut.

Add the melted chocolate to the remaining batter. (Just for interest sake, I also added some cocoa powder - only about a tbsp - to give it more of a chocolate oomf.)

I used a 22cm square baking tin, lined with baking parchment for these brownies. Place chocolate batter in pan and then place spoonfuls of the coconut mixture randomly on top.

Susan
Posted by Canadian Abroad at 17:14