Herman the German (the Friendship Cake) has left the smelly sourdough stage and entered the baked goods part of his life. The making of the cake was, um, interesting – to say the least. There are very few instructions. Just a list of ingredients that you need to add. They do not stir together very easily and look remarkably unappetising once you have got them to a semi dough like consistency. This is not a light and fluffy batter. If there was an urgent need for mortar in the building industry I am sure this would suffice and the buildings would stand for thousands of years. 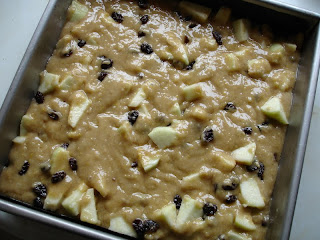 The concoction needed serious manhandling to get it from bowl to pan. Herman wasn’t going without a fight. Then to make it look all the stranger the instructions told me to melt ¼ cup of butter and pour it over the top, followed by a sprinkling of ¼ cup of brown sugar. 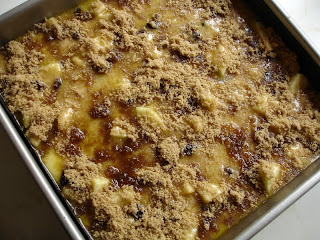 This sounds terrible! Well it looked rather terrible too. But it did smell good. And it smelled even better cooking. The mixture contains two heaped teaspoons of cinnamon, and chopped apples, and raisins too, for good measure. These things make for luscious smells. Cooking improved my opinion of Herman by leaps and bounds.
Then I started getting annoyed. Cooking time was set at 45 minutes but you are told to check it at 35 minutes. At 50 minutes it was still wobbling like an unset jelly but the top was sufficiently browned. I covered it loosely with foil and hoped for the best. Part of me started being thankful that I had given out all three portions of the friendship part of the batter therefore I wouldn’t be able to make another one.
This went against John’s suggestion that we keep one of the portions for ourselves. I pointed out to him that I didn’t want to be making or eating the same cake every ten days for the rest of my life and that eventually even I would run out of friends to pass on batter to. Sooner rather than later if this cake isn’t any good!
But, eventually, the cake cooked – almost. It fell a bit in the middle. Honestly, I had a school run and it had to come out the oven even if it wasn’t ready. There is only so much a person can do. 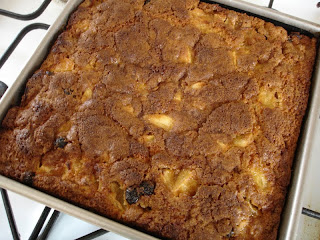 I waited for John to get home and we cut into it. It didn’t look too promising but in actual fact it is very nice. One of those cakes where you have a little slice to be polite but then have another little slice, and another, and another. It is still warm though. I cannot yet report on what it is like cold. It would be nice for dessert with ice cream in this nice warm stage. (John gallantly stepped up to the plate and had this for dessert and pronounced the ice cream/cake combo very good.) 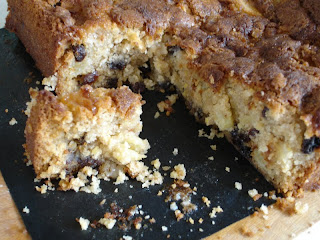 So, in conclusion, it was worth making. It was worth keeping ‘Herman’ alive and bubbling for ten days to have the cake. But I wouldn’t do it again for a little while. If and when I did do it again I would bake it in a different pan. I used a 9”x9” baking tin which was plenty big enough for the batter but I think it may benefit from being a flatter, bigger cake that is cooked all the way through, even in the middle.
Maybe in a few week’s time when the cake has done the rounds of all the school mums and villagers it will make its way back to me again. I would make a few changes, tweak it a little. Then see what happened. It would be fun to try.
Posted by Canadian Abroad at 07:04