The One That Got Away

I think that there is a tarantula living in my house. Or at least a spider that is a close cousin of said hairy creature. I managed to hoover up a dozen of the regular ones today, but this one - oh goodness. It had speed and it had cunning. It was big, black and hairy. And it wasn't going to get caught for love nor money. It has a little nook to hide in and sees me coming, hoover nozzle in hand and he gives me a cheery wave (or is that a two finger salute) before he dives for cover. I need to buy a silent hoover and some camouflage, I think. He is the one that got away!

Moving on, the terrors of hoovering had to be pushed aside with more cheerful stuff. So I made more stars. I say this in case Tinca, my Finnish friend, thinks I have forgotten that I am making a quilt for her as I trundle on with other projects. I have not forgotten and it is in the loop to be returned to regularly. I now have seventeen stars of varied sizes - 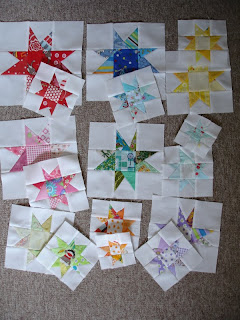 Two in each colour, except dark green because I didn't think I wanted another dark green. I think that is enough stars. Now the really hard part - how to join them all together seeing as how they are in so many different sizes and such. This will be some interesting piecing!

Helen and Emily have been given a fundraising project from the school. The PTA provides each child with £1 and then the child has to think of a way to buy something with that pound that he or she can then make something with, or do something with, that will 'grow the pound'. I have quickly come to realise 'Grow A Pound' involves me giving my girls a free for all in my craft supplies and then taking them to town and supplementing the pound (heavily) to buy them the other things they deem necessary so they can do their making. Clever PTA! Emily plans on making cards. Helen is making felt ornaments. She is off to a great start, using felt and buttons found at home. 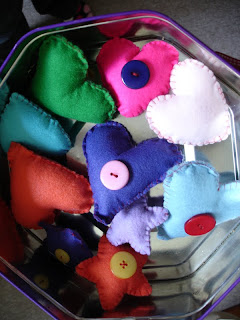 She says she intends to fill the biscuit tin. Great! Seeing as how the felt was strewn about, and the buttons, and the thread, and the ribbon, I decided to have a play too. Partly induced by my purchase of this perle thread online - 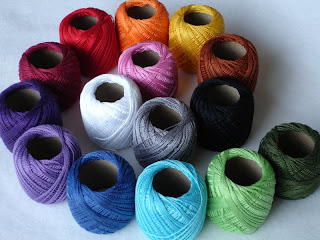 It isn't the best perle available and not all the colours are what I thought they might be but that is the risk of online purchases. It has happened to me with fabric before - it being a far different shade than I expected. I can live with it. I didn't go for top end perle because I wanted to just see what it was like in a general sort of manner first, and I also know that my two will be using it as soon as I turn my back. If I establish a 'you can use this' pile and then start my own little hoard of the finer stuff that works for me.

But it was nice to sew with, not getting twisted and tangled the way that embroidery strands can at times. I knocked together a little Christmasy ornament just to see - 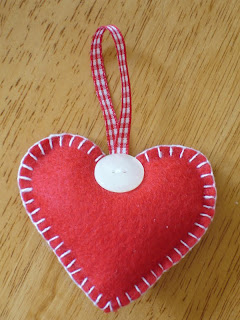 I like making these little ornaments. I made a lot last autumn and gave them as presents at Christmas. I guess since then crocheting has been filling my evenings instead.

We are having a sleepover tonight. One of Helen's friends is here now. I am going to hunker down with some sewing while they watch Pirates of the Caribbean. John thought it might be a little scary for our two but when I pointed out to him that they are unfazed by anything Dr Who or Harry Potter throws at them he changed his mind. (Fingers crossed that I am right. They both used to be such wusses.)

The three girls just finished making veggie and tuna sushi. I have some pizzas, and some crisps, a dip for more veggies and that is their movie feast. Wonder who will be asleep first tonight - me or them?