Back to the Blogging Life

Things were not normal in this house this morning. I woke up at what Helen would refer to as 'stupid o'clock in the morning' and no wishing or hoping got me back to sleep. So the first load of laundry was in before 6am. John was in his office half an hour later and less than half an hour after that Helen was in the kitchen making cakes. At least, now that she has taken on the role of chief baker, I can blame my lack of weight loss on her instead of myself.

Emily was the only member of this household who had the common sense to stay asleep past 7am and I think she would have slept a lot later if there hadn't been so much going on already. I feel for her. I too would prefer to be asleep at that time of day. I feel robbed of sleep even though I have no one to blame for waking me up.

With the turmoil in Blogger land the past couple of days I have forgotten to mention that Judith at Rags to Bags has stepped forward and become my third, and final, Pay It Forward participant. As my first PIF was Jane that is one delivery made and two more to go, plus my bonus non-PIF to a non-blogger reader. I have a plan in place for number two PIF - Nikki, and for the non-blogger - my friend Francine. Now I have to think about what to make for Judith. It is not as easy as you would think because all three of my blogger PIFs are majorly fantastic quilters so I am rather shy of making anything quilty for them because, well just because I am not a major quilter - just a happy go lucky one. 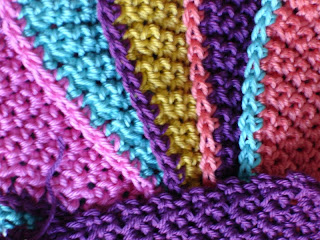 ﻿I had lots I wanted to get done today, and failed. Dancing classes, feeding the hungry hoards and life had other ideas. I managed to cut the fabric for another wonky star, finish off one mini project and do a little bit more on the above crochet project - that is it. Hummff! So much for the best laid plans and all that.
Maybe tomorrow though I have promised the girls a day in the kitchen. Plus there is a bonus child here who is sleeping over tonight - and this child loves pancakes so I will be flipping those with a vengeance in the morning. The Canadian kind - round, plump and drizzled with maple syrup. Then we have all sorts of things planned for our dinner. No roast here tomorrow. We will be creating! I'll try and remember to have my camera handy.
Hope whatever you are up to that you are having a great weekend too.
Posted by Canadian Abroad at 16:38