I posted yesterday right in the middle of a marathon food making session with the girls. So you have no idea how incredibly well it turned out. It was sooooo good! Now making your own japanese dumplings and crispy duck and pancakes may seem like a total palaver - in all honesty it is a palaver - but when you sit down to eat and it is even better than you hoped and your children are pleased as punch with themselves, well then it is worth every minute.

I told you about Emily's dumpling making factory. Helen was in charge of the pancakes. These are easier to make than you would think and rather fun too. The dough is a very basic combinatin of flour, a tiny bit of sugar and boiling water. You knead the mixture smooth, let it rest and then get rolling. 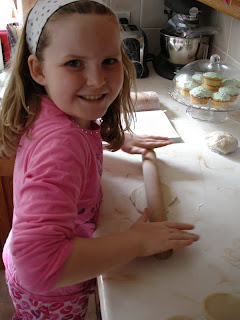 You roll out the dough not too thin and cut it into discs. When that job is done you brush half the discs with sesame oil and place the other half of the discs on top of them. Then you get into the serious rolling to get them nice and thin for wrapping around your duck. 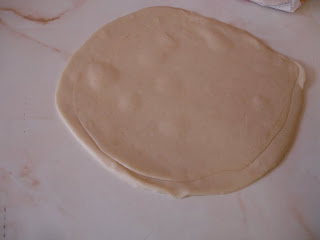 The pancakes are cooked in a dry frying pan. Just for a short time on each side. 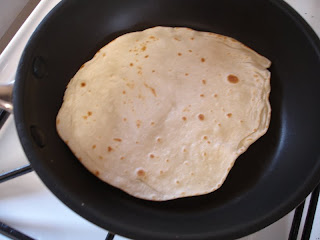 Now comes the cool bit. Making sure you don't burn yourself, you peal the two layered pancakes apart. The brushing of sesame oil that you did before rolling them together enables this. 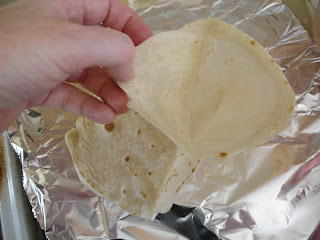 Repeat the above steps until all the pancakes are cooked. We ended up with about 30 once all them were pealed apart. I didn't do anything special to the duck, other than buy it cheap at Tesco where they were selling half a duck for £3 the other day. Just popped it in the oven with a little seasoning at Gas 3 and left it alone until it was crisp and cooked. I shredded the meat off of the bones with a fork. Add the hoisin sauce, shredded cucumber and spring onions on the side and the job was done.

Emily's dumplings were briefly fried, then steamed and then finished off frying again so that they browned on the bottom. If you have had pot sticker dumlings before then this is what these were like. 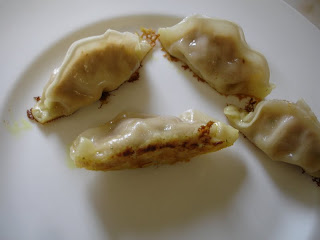 Some Singapore noodles and the veggie spring rolls the girls made me buy in Tesco rounded out the meal and we got stuck in. As I said in the beginning - it was good. I don't think that the things we made tasted any different from what we would have got in a (good) Chinese restaurant. Mind you, I could use a take away today after spending the best part of the afternoon in the kitchen yesterday! 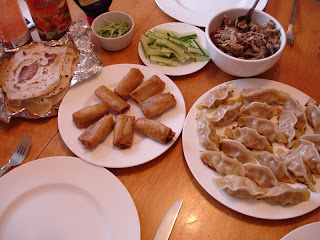 On the Brit front, I have another new flag to add to the Brit Quilt and Brit Bee ones. Now we have the - 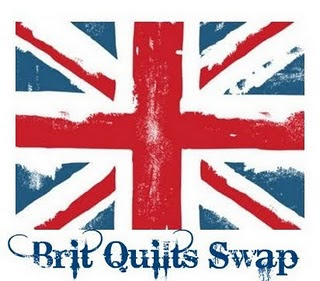 Yesterday, all those who signed up for the swap, received their partners. Now we have until the end of June to make a mini quilt - no bigger than 24" square - for the person chosen for us. We don't tell anyone who that person is but can put photos on our blogs and flickr of the quilt as we make it. The design, colours, quilting methods - everything - is up to ourselves but it is our job to find out as much as we can about our partners through their blogs and flickr so that we make something they like. Meanwhile someone in the group will be making something for me. I won't find out who until I receive the quilt, just like my recipient won't know it is me making her's until the postie pops it through her letter box. Fun! The interesting part will be seeing what other people are making and trying to guess which one I will be getting.

I had set aside today as the day that I would be making Trudi's blocks for the bee and I got the fabric all the way to the sewing machine before I remembered I had over 50 letters to modify for the PTA to try and raise prizes for the Summer Fete raffle. Oh joy! But one does what one needs to do. So one did it. And now it's done so maybe tomorrow, barring unforeseen circumstances, I can get the blocks done.

Then I can start working on my secret partner's little quilt. And the wonky star quilt. And finish the Pips x2 quilts. And do more for my Pay It Forwards. God, what have I got myself into?!?!?

Susan
Posted by Canadian Abroad at 14:52