Helen and Emily had an egg decorating contest at their school this week. The winners have not yet been announced but they were allowed to bring their eggs home yesterday. I thought that they were just great and showed originality so therefore I had to let you see them too.

﻿Aren't they great!?
I have done the usual mundane chores today and I also went out and plucked all the leaves off the dandelions invading my herb patch. According to my very wise (he reads this) brother if I continue to rid the plants of their leaves they will eventually starve to death. All fingers and toes crossed that it works because we all know that you never, ever get all the root when you try to weed a dandelion and it grows back with a vengeance. And these blighters are ensconced right in amongst the herbs so very hard to try to dig out any way, even if that was what I was going to try and do.
I just did the herb garden because if I did the whole garden and its resident dandelions I would be out there until  midnight and only stop becauseit was too dark to find the rest.
Then I went to water my tomato seeds and we have life! Woohoo! 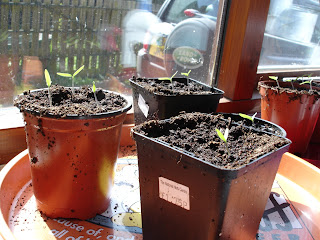 If you look in the background, out the window you might be able to tell that my beastie has shrunk. All my subtle hints to John like 'I hate that car' have sunk in and he traded me back the Freelander and headed out in the Discovery this week. I no longer need a step ladder to get into my vehicle. Ever since that fateful weekend when the step snapped off the Discovery and hurled me into the pavement I have not had such kind thoughts about that car. Yup, I hold a grudge.

More yarn winding last night brought me close to the end of that task. I only have two to go. I also discovered that I bought nine skeins, not eight, of the yarn. I really need to pay closer attention to what I am doing! I have the winding down to a fairly smooth operation now with very few hiccups. So maybe tomorrow night I will be hooking not winding. 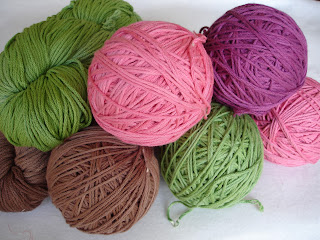 Finally, I have taken the rotary cutter to my 'disappointment' of yesterday. Careful thought before I fell asleep brought two conclusions. One, I think I know how I am going to try and join the squares up in my second attempt. And two, I should have remembered that I dreamed up the first game plan after a large glass of red. No wonder it all turned out so wrong! I still have a lot of stitches to pick out - ie. I haven't started doing that at all yet. But I did get my Fussy Cut layered up and pinned. Thinking of starting stippling after the school run. The Pips quilt was my first attempt at stippling and I can see the appeal. It is quick and it is forgiving. I like that in a method. 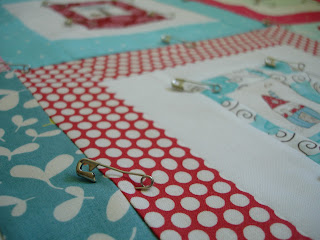 Oh, oh! Before I forget. If you haven't yet seen it, go over to Aneela's comfortstitching blog. She is giving a sneaky peek of her soon to be launched second fabric line for Moda. If you liked Sherbet Pips then you are going to love Little Apples.
Susan
Posted by Canadian Abroad at 15:12