Me, my machine and I - and some Sherbet Pips

I was left behind this afternoon. John took the girls out for a bike ride and left me at home. Am I complaining? Uh, no. In fact I declined to go with them. Horrible mum that I am I explained to John that as much as I loved him and the girls I hadn't really had a moment alone in over two weeks - unless it involved me and a grocery store, which just doesn't count. So I opted out.

Speaking of which, I had to pop out to Waitrose today to top up on some 'bunny stuff' for the morning as Tesco had such a uninspiring selection yesterday. Seeing as how I was in Daventry, which is two thirds the way to the quilt shop, it seemed silly not to detour on the way home. Only problem was I had to speed shop because that chocolate in the car was going to form into a puddle faster than I could say 'Oh no!' if I didn't just grab the first suitable fabric and get out of there. So I did, and you would have been very impressed with me.

Add today's speed purchase to the arrival of my fabric from the USA and I am all set to start finishing off some quilts. 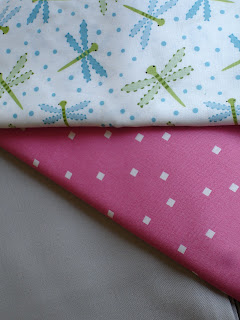 The dragonfly print is what I bought to back the small blue 2" square quilt. Once everyone was out the house I got to work in blissful peace. I layered it up and pinned it. 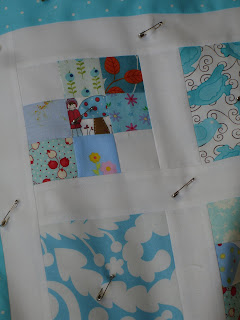 Then I had a look at what was left on my bobbin in the way of thread because I did not want to run out once I started. There was very little left. I do have other bobbins, but they have other colours of thread on them. I know that I need to invest in a heap more bobbins. Let's just add it to the list of things I need to get to make my sewing life easier. It will happen when it happens. Meanwhile I am getting by admirably most days.

I decided that there was too much thread to pull off the bobbin and waste so it would better to find something else to sew. And I did. It was blissful. The sliding doors were wide open. The sun was shining, but not in my eyes. Birds were singing. The occasional baaaaa could be heard in the background. The neighbours had friends/family over and there was much laughter and the addictive smell of a barbeque overrode it all. I was happy!

So I made a little something. And it used up the thread on the bobbin. Therefore it is now fully loaded and ready for the next session. Only it won't be tomorrow because my sister-in-law and mother-in-law are coming over. My SIL will be staying for a brunch - the full cooked brekkie thing - and my MIL will be staying on (she lives close by) and having her dinner with us too. I shall be in the kitchen most of the day and I do not expect to be spending that time taking photos and documenting what I am making. (Sorry!)

Before I go, here's a look at what I made today - 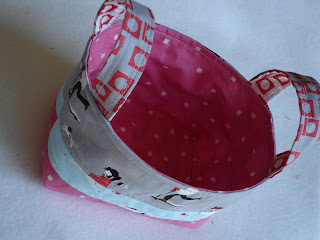 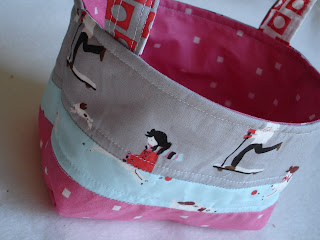 I thought the Sherbet Pips really lent itself to this little bag. What do you think?