I mentioned an Easter Egg hunt in a post the other day. It is happening on Monday as I said due to the fact that the children have a very, very easy month of it here in Northamptonshire in April. Minimum schooling. Lots of leisure time. Lucky them.

One of the downsides of a small school is fundraising. A small school population means a small starting base to raise funds from and only so much that you can do. Unfortunately a small school still needs expensive equipment and as the government stopped supplying many of the IT requirements for schools long ago and the school budget doesn't stretch to these needs, it falls on the parents to raise the money so that their children can benefit from the latest technology.

The PTA does many things throughout the year and this year my small contribution was the idea of having an Easter Egg Hunt. The method we are using is not my idea. I want that to be clear. It was used at the school the girls attended on the Isle of Wight and I do not wish for anyone to say I am claiming credit for something I did not think up myself.

This egg hunt works because you do not hide the chocolate - and take the risk that several older children find 90% of it and the rest of the children are left in tears. Too ugly a scenario to even contemplate! This egg hunt can be run rain or shine as well. Here is how we are going to do it -

Draw two halves of an egg and then trace that shape onto a piece of A4 paper (or the North American equivalent). 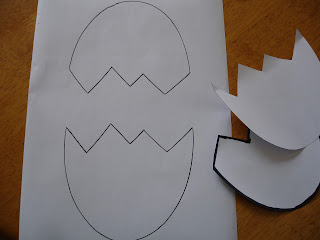 Photocopy this about two dozen times. 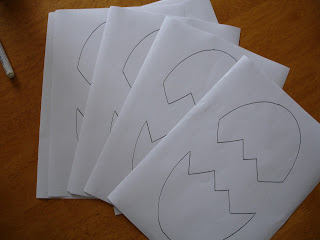 And then get creative with your egg designs. Sounds easy but, let me tell you, by the fifteenth or sixteenth you are looking back at what you have done making sure you haven't duplicated yourself. 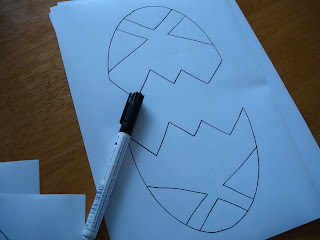 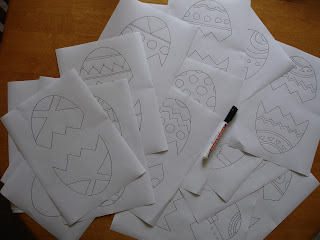 Now for some more photocopying. You want to copy each egg design onto numerous different colours of paper. Ultimately you need to have three egg designs for each child participating in the egg hunt. 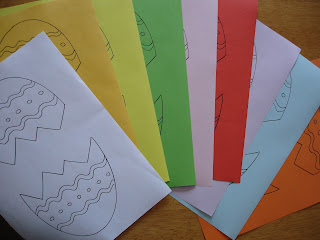 Cut the paper to separate the egg halves and trim down each one so that there will be laminate around the halves when laminated (last Thursday's task). 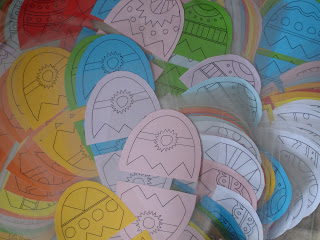 Now cut all these laminates in half and put each egg half in a separate pile. 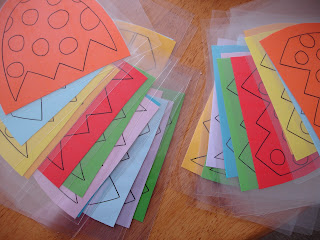 Half the eggs halves (try to say that quickly) are for hiding all around the playground (or wherever you have decided to have the egg hunt) and the other half are for giving out to the children. We are giving each child three egg halves and then they have to go and find the matching half (both in colour and in design). When they have all their halves they receive their chocolate bunny - or prize that the fundraising committee has chosen.

You don't have to charge a lot for the tickets. Just enough to make a £1 or so profit on each child. Meanwhile we will set up a stall selling cups of tea, glasses of squash and cakes. We will also have an Easter chocolate tombola. All the eggs for this were donated by the parents on Friday. Each child brought one in and in return got to wear their own clothes to school.

There are all sorts of other things you could tag onto this to make it fun and raise further funds. Cookie decorating. A raffle. Whatever you wanted really. This is our first one so that is the extent of our efforts but it should (a) be fun, and (b) raise a little more money for our PTA coffers.

And the best bit is that you have all the 'eggs' made and laminated. Good for years to come now.

I should have had more to report today because I am positively itching to get back to the quilt. I love this stage where the final bits are coming together. But I thought I would rather spend a few hours down at A&E with the girls waiting to have Helen's foot x-rayed and diagnosed. She has been hobbling around worse than a one legged pirate all week and the pain hasn't decreased in her foot - but it is still the same cause, soft tissue damage. Only the doctor at A&E said it might be another ten days before it started getting better versus the two to three days that the GP indicated. She is very frustrated. The sun is shining and she wants to go run around and ride her bike. She is reduced to the swing set and watching her unrestrained sister. Not so fun. So she is making a cake (I think it is for me but don't tell her my suspicions).

Susan
Posted by Canadian Abroad at 15:42