Sunday, Sunday - What a Day

Yesterday I woke up and immediately wanted to go back to sleep. Today, well that is a totally different story. I would like to say I lept out of bed but that would be stretching it beyond the realms of reality. Let's just say I started the day with a happy bit of energy.

First, I went into nice wife mode and whipped up a batch of blueberry muffins because John has been hankering after some and I just thought it would be a nice thing to do. It is a change from my usual 'fend for yourself' attitude towards breakfast. 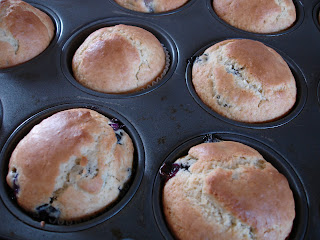 This was followed by the making of dessert. My father has been in the country for the past couple of months but is headed back to Canada this coming week so he was invited over for a meal today, with his girlfriend, significant other, oh what on earth do you call your 78 year old father's newly acquired love interest? Let's just call her Pat. She is a lovely woman and that shouldn't cause her any further embarrassment.

So I turned to my favourite cook book author when it involves chocolate and dessert in the same sentence - Nigella Lawson. I chose to make what she calls her Easter Egg Nest Cake. But it is neither Easter, nor am I involving any chocolate eggs in the completed cake so I veered off of her recipe once the initial cake was made.

It is a flourless, chocolate mousse type recipe that looks unctuously good before it ever went in the tin and the oven - 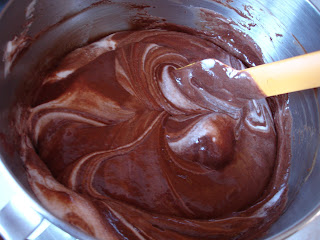 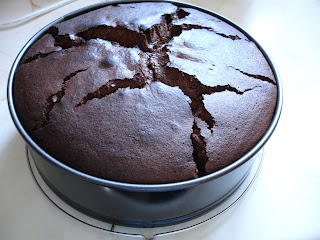 But quickly became this-

I would be devastated but it is supposed to do that. Now Nigella fills her's with a chocolate flavoured whipped cream and then scatters chocolate eggs over. I am opting for freshly whipped cream and a combination of raspberries and strawberries on the side, so people can help themselves to whatever they like.
Next came the chicken. I was using a version of a dish I saw made on telly years ago. You start by spatchcocking a chicken. This involves using kitchen shears to cut down the breastbone of the bird like so -
The next step is not for the squeamish. Take your bird, place it on a large cutting board and spread it out. Using the heals of your palms press down on the backbone of said bird until it flattens (with a crunching sound which might put some people off at this point). You could always ask your butcher to do this step if you have a butcher and it all seems too much of a palaver. Your flattened chicken should look something like this - 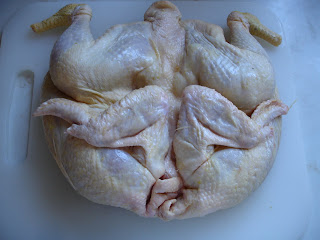 In a bowl large enough to hold the chicken (not necessarily in it's flattened state) combine fresh lemon juice, ground black pepper, lots of crushed garlic and oregano - Greek if you have it. Whisk in some olive oil. 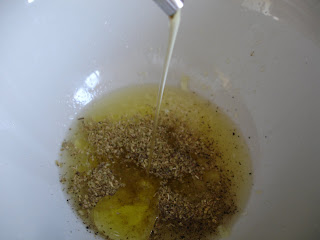 Place the chicken in the bowl and role it around in the marinade until all surfaces, inside and out, are coated. Cover the bowl and place it in the fridge for a few hours. Meanwhile, make the same lemon juice, garlic (but just a bit this time), black pepper, and oregano combination and this time add a nice glug of peppery extra virgin olive oil rather than the more utilitarian oil used previously. This will be the dressing for the salad that goes so nicely with this chicken. ﻿
When you are ready to start cooking the chicken remove it from the marinade but reserve the marinade. Place the chicken on a rack above a roasting tin. Season and place in a medium hot oven. 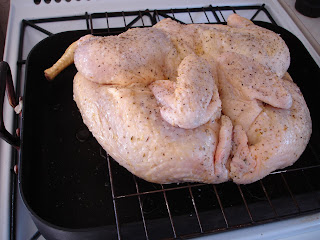 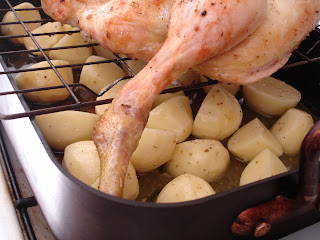 Cook until the juices of the chicken run clear when you pierce the thickest part with a skewer and the potatoes are tender. If one item is ready before the other then remove it to a warm oven. The lemon juices will caramelise on the potatoes so they will go sticky and incredibly tasty, but not crispy.

Meanwhile, make a salad. Ingredients of your choice obviously, but I like a rustic Greek style salad - peppers, red onions, cucumber, tomatoes and feta cheese - all tossed in the dressing made earlier and glistening like jewels. 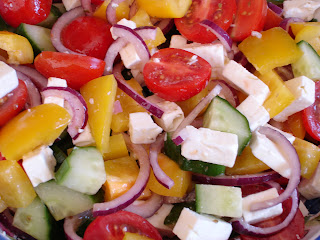 This is a lovely meal for a day like this. Summery but still using the oven. When it gets hotter you can barbeque the chicken with the barbeque lid on, high above the coals - but you won't be getting the potatoes roasted in the juices. A couscous salad or some other substitute works well then.
Okay --- right about now I should have a photo of the roasted chicken surrounded by tasty potatoes. Yeah, I should but I don't. I forgot and we ate it. All I could show you now are the remnants of a carcass. That would not be a pretty picture. So, it was good. We ate it all. So would you if you made this. Honest.
It's 7pm and this day has gone quickly. Anything else I have to say will be said tomorrow.
Susan
Posted by Canadian Abroad at 18:58