I put my name down for Aneela's Crazy Scrappy Block sew-a-long. I did so with the best of intentions even though I knew that my scrap pile was limited. But I wanted to give it a go. So I did. Why does everyone else's crazy scrappy blocks look good and mine (unfinished) looks like something that went horribly wrong? 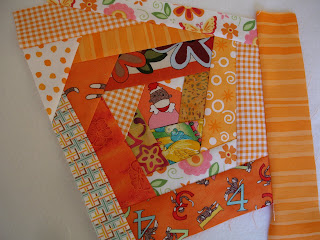 You may argue and say it looks fine (or you may not) but if you look at the upper left hand side it just does not look right. I went wrong somewhere. All those sort of maybe triangles where they shouldn't be. But it is what it is, and it is going to be the only one. Not because I made such a pig's ear of this one. But because I discovered something about Crazy Scrappy Blocks.
They take up much more fabric than my meagre little scrap pile can cater to. I have all those little bits that I refuse to throw out but I do not have that many long bits so once the scrappy block gets past a certain size that is it - I am cutting into my fabric stash rather than using up bits that might not have a use otherwise. ﻿That makes this whole project counter productive for people like me. I am actually creating scraps trying to come up with the appropriate fabric. That is somehow very wrong.
So here are my scraps - not all of them but the ones that I like and that fit into my colour sorting piles. I do have a fair number of other scraps which I got - not saying where - but let's just say someone interpreted modern and colourful as dark and darker. I have yet to think of a use for those scraps. (And if anyone out there has a hankering after dark scraps of any sort please tell me and I will post them to you forthwith.) Back to the bright scraps - 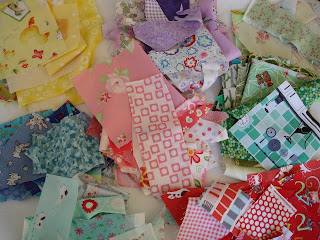 I might not be able to do the crazy blocks project but I like the way these scraps look all sorted out. I know, I know - thousands of quilters out there always have their scraps colour sorted and all their stash carefully stored according to colour, etc but then they are not me. I had all my scraps stuffed in one large zip lock bag (told you there weren't a lot) and all my fabric lives in one of the girls' old toy boxes. When you need to find something near the bottom the only way to do it is to haul just about all of it out and have a good look. Unless you are my children and then you will dig, and overturn, and worm your way about it all, dragging out your chosen piece of fabric and leaving the rest in merciless disarray.
So what shall I do with this little pile of rainbow scraps? Ah! I have an idea brewing in my brain and need time to play with the pictured bits and bobs. Then I will show you. But my mum is here so I shall be out and about with her rather than snuggled up to the sewing machine so there shall be a slight delay. Oh, and my idea is not some radical new idea. It will just be my play on blocks well used by many others.
Meanwhile I think that I might be able to turn that scrappy orange block into a pillow, or trim it down and use it as a pin cushion and poke the poor monkey in the eye repeatedly (eeuuuuww!), or something. Any suggestions would be welcome.
Well they have had three days in school so I suppose the girls need a holiday again. Bring on another four day weekend. Wedding to watch - one girl dead keen and the other more cynical child asking what is so important about two people getting married. As you have been reading about the girls for a little while see if you can guess which one has the attitude and which one is the die hard romantic? You would then also have a good idea which one is already hell bent on being a goth. I have already been told where her piercings will be. Oh joy!
Enjoy your holiday weekend.
Susan
Posted by Canadian Abroad at 16:11