I didn't have a lot of time to do any sewing today but I did get a quick play with some scraps which were leftover from some of the bunting I made. 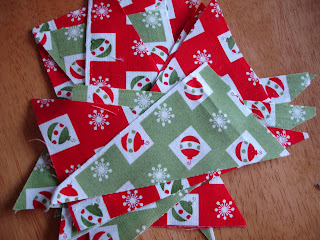 I sewed them together, one red and one green, to form rectangles which I then trimmed so that they all had the same width. Next I sewed these rectangles together to form two larger rectangles, which I cut on the diagonal, reconfigured and sewed to form two tree shapes. (This is obviously not a tutorial!) 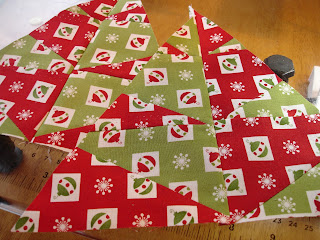 I got some scraps of wadding and lightly quilted each shape to them. 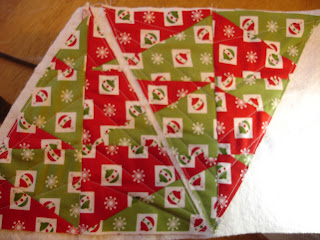 With a gold ribbon inserted to hang the tree by, and a felt tree stump at the bottom, I also tacked in a small muslin pouch with crushed cinnamon, nutmeg and cloves when I sewed these two triangles right sides together, leaving a small gap for turning. 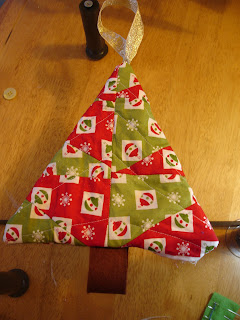 I stuffed it lightly with polyester toy filling, hand sewed the turning hole and then hooked the gold loop over a door handle. It is not meant for hanging outside, but that was the only place there was sufficient light left to get a photo. The idea is that it hangs from a door handle in the house and as it gets bounced around when the door is opened and closed it will release the Christmasy scent of cinnamon, nutmeg and cloves. Well, that's the theory at least.

Now, the question is do I think this is a good enough idea to include in people's Christmas parcels?

Susan
Posted by Canadian Abroad at 16:52