As opposed to the unfinished one. I gave Helen and Emily a quilt each for Christmas. Helen's was almost done. Emily's was wrapped with the binding on but the basting pins still in as lots of hand quilting still to be done. Please, don't tell the quilting police that I did it in that order. I just thought that the binding would give it a more finished look and not make the disparity between the two quilts so obvious.

So I shall show you Helen's quilt. I will keep the unveiling of Emily's quilt for the day that those pins come out and the quilt is on her bed.

I started both quilts when we moved to the Isle of Wight and were in the first house we lived in there, so that would be about four years ago, or more. The girls were actively involved in the design approval stage. They drew up their own designs originally but came up with such convoluted ideas that there wasn't a chance in hell I would ever manage to translate them to fabric. We compromised on working together.

Helen's quilt is based on the Hugs and Kisses design. I used a line of fabric called Simplicity. Helen's quilt used the fabrics from this line that were patterned and floral. Emily's quilt used the monotone fabrics. You will see the huge difference this made to the resulting quilts when I eventually reveal Emily's. Hers is much more subdued.

We waited a few days before we went outside and got a better photo. I held the quilt to keep it off the wet grass and Helen wielded the camera. It took a few tries.

﻿ ﻿﻿ ﻿ I machine pieced the quilt top and then entirely hand quilted it. If you have followed this blog for a little while you will be aware that I started the hand quilting a long time ago - using embroidery strands. I stitched too close to the seams and when I was stitching on the side of the seam that the fabric was pressed to there were too many layers to get the needle in and out in stitch lengths that didn't look like they were done by a five year old. I am not exaggerating. I like longer, bolder stitches over traditional smaller hand quilting but these stitches would have been the best bit of half an inch long if I had persevered.

So I put the quilt aside, for a long time. Meanwhile I started blogging. You lot opened my eyes to all new things, including perle cotton. I was an instant and easy convert. I decided that using perle and stitching further away from the seam - like on the outside edge of the 1/4" seam allowance - would make finishing this quilt much more attainable. And it was! 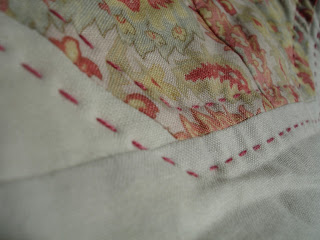 I finished all the blocks and only had to pull out the original stitches, which I was doing Christmas Eve at some stupid hour, when I decided enough was enough and I could do it after Helen had received the quilt. Only now she has it she wants to keep the three remaining double stitched blocks as they are. She sees it as part of the way her quilt should be. So three blocks look like this - 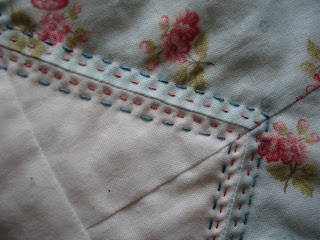 And I don't care. It is part of the long, drawn out history of this quilt and it is the way Helen wants it. I guess that is what counts for more than anything. She is the thrilled with the final product and that was what I wanted.

﻿ ﻿
And that is Helen's quilt. Stay tuned for the eventual post about Emily's.

Susan
Posted by Canadian Abroad at 09:53