It Was Bound To Happen Sooner Than Later

We all know what quilters do. We cut apart fabric to sew it back together again. And we use traditional blocks as inspiration, other people's creations as inspiration and - really -  most things have been done already in one way, shape or form.

So sooner or later something I was working on would appear somewhere else. And it happened this week. I had a commission to make a quilt to a design of mine for Love Patchwork & Quilting. I sent my idea off to Jenny a year and a half ago but it got lost in the myriad of things that cross an editors desk. About four moths or so ago she found it again and commissioned me to make a quilt based on it.

So I have been cutting and sewing to get back into the groove and make the deadline that was looming due the holiday interrupting the regular schedule. Then I woke up yesterday, thirty blocks made, sashing and cornerstones cut and ready to piece the top together. But I opened Instagram first and one of the first posts I saw was of a quilt to an almost identical design.

I immediately showed Jenny the post because why would LPQ want to publish such a similar pattern just a couple months after Make Modern? I totally get that.

No need to keep this a secret any more then.

This is the quilt that is in the latest issue of Make Modern by Bec Proschogo. I love her take on this block a lot. A lot and lot! 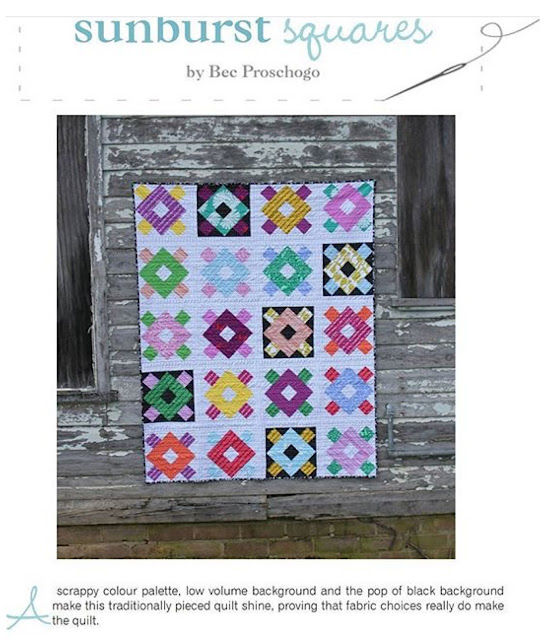 So, now I am temporarily (I hope) commission free and I'm playing with fabric. I'm also doing boring stuff like hoovering and cleaning the loos, but I try to pretend that isn't happening in my life. I do avoid housework reality as much as possible.

Susan
Posted by Canadian Abroad at 15:18