My Neck of the Woods

Whilst the house has been bashed by thunder, lightening and hail storms, things have been busy inside as well. For one, it is the annual 'let's all get sick' germ time. To be fair, poor Emily got it the worst, then I spent the best part of the weekend in bed (and used it as a good excuse to read chic lit and sleep), and now Helen is home. In the scheme of things it isn't too bad a tummy bug, but I have discovered that a child at home feeling ick equates to a child at home sitting at the computer playing Minecraft incessently.

This in turn limits my computer time even more. So to catch you up on all the January nonsense I thought I would grab the opportunity while I could.

First off, my new laptop is still off with the manufacturer awaiting to find out if it is fixable or replacement material. Apparently, I shall potentially have to wait until the end of next week before I have it back, or receive said replacement. I sit here waiting very impatiently.

Back at the beginning of the month I discussed my desk and what to do about cutting a hole in it to recess my machine. Here are my limited conclusions -
(a) I am a big sap because I still can't bring myself to do it because I love the look of the desk so much.
(b) If I get over this flaw in my character I should let him cut the hole because every last person who uses a recessed machine was vocal in their belief that it is the best thing going.
(c) Whether it happens or not is a mute point right now as I am so busy I refuse to clear away my sewing to let him finish it, hole or no hole. I do not have the time.

Next, the Briar Rose quilt still hangs there near my machine, taunting me with its ugliness. (Okay, I know it isn't a total loser but I will never love it.) I don't have time to finish it right now but I will do, just the way it is. Everyone who suggested that sashing between the blocks would redeem it is right. I am just too lazy to want to rip it apart and do that. I am going to back it, quilt it and give it to a very worthy charity. I am sure there will be a little girl out there who will become enamoured with the little froggies - even those rendered legless or motherless by my ruthless cutting.

So, between trying to delve deep into my sympathy reserves for sick kids (I'm really not good at this and think that in bed napping is the best place for them to be), I've been receiving more Great UK Destash parcels. Here's the last of what I ordered.

I say that is everything I bought in the destash, but must admit that I actually succumbed and bought something in the Aussie Destash as well. Seriously, even with postal costs it was still only £20 for a layer cake. An oop layer cake that I thought had really nice looking fabrics in it. Obviously I will show you when it gets here.

And then there is the sewing I have been doing. I have - finally - finished all the HSTs for my quilt top. And I have been piecing like a mad woman. The top is 3/4 of the way to being complete. As for the hexies, well I just keep cutting, and basting, and repeating that over and over again. I'm still not sick of them yet so this may go down as the only epp project that I ever do that I don't lost interest in half way through. 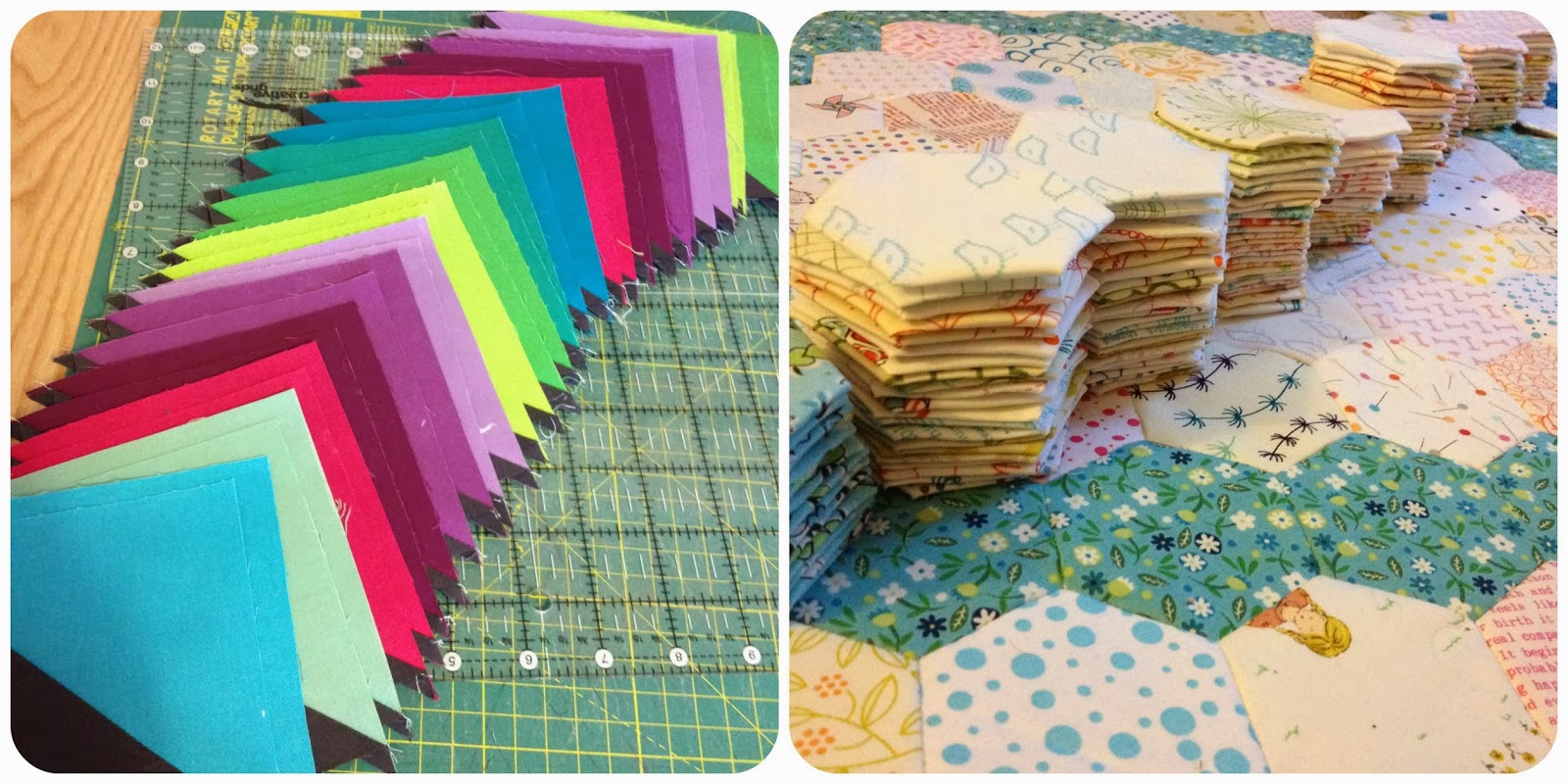 I'll be back, if the girls don't hogtie me and keep me from getting on this computer. It's getting harder and harder now that they are almost as tall as I am!

Susan
Posted by Canadian Abroad at 11:45