Instead of life interfering with my sewing time today, I made sure that sewing took over my life. I thought about what to make for dinner, and decided that sausages, chips and beans would sort out that problem. No prep to do then. I looked at the hoover. I decided that it was happy being ignored in the corner. I haven't even done the breakfast dishes yet, but I don't care.

I then got down on my hands and knees and pinned for England. 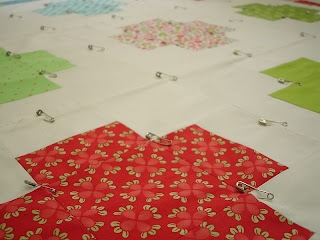 Without even considering cleaning the bathrooms, I proceeded directly back to machine and got stippling. 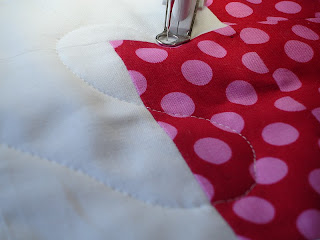 I would like to say that it was just a simple matter for the quilting. But I can't. It was back to feeling like I was wrestling with a walrus, only this time the walrus was winning. That quilt got away from me a number of times. Do not look at the quilt too closely, or the battle scars will be obvious. The highlight was when the quilt really did get away from me and I got to witness what happened when the machine needle hit a basting pin. Dear me, it was not pretty!

I got there in the end. The quilt is stippled, in a bigger stipple than I normally do. I thought that this would be easier but the bigger movements were part of the problem with me controlling the quilt, and it also hard to break old habits of wanting to keep those little wandering paths of stitching closer together. 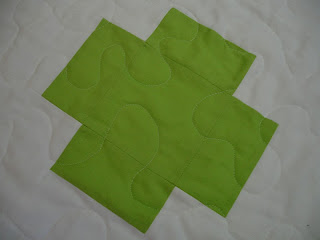 Finally, I trimmed the excess backing and wadding. 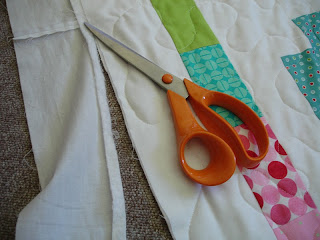 Now I am going on the school run covered in thread ends but inordinately pleased with myself. The girls won't be when they see the state of me though! 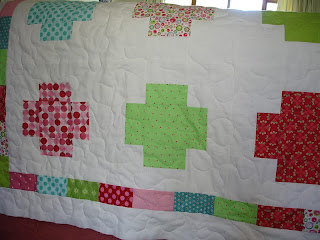 So, just the binding to do and then it is going to do a fabulous job of hiding my ugly sofa, as demonstrated above.

Finally, the postman has delivered more bee blocks to me. I am so thrilled with these because (a) they are stunning, and (b) Terri, who made them, has had a tough month so I was fully prepared to wait for them to be done when she was good and ready. So, a huge thank you, Terri, and so pleased that you are part of our bee and I have your blocks for my quilt. 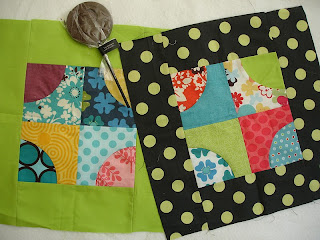 And thanks for the chocolate. Devoured today when I had to step away from the stippling when I tried to sew the basting pin. Sometimes chocolate is the only thing that can fix things! for everyone else, who didn't get to enjoy the chocolate, here is the joke that came with it -

Two elephants walk off a cliff...

Susan
Posted by Canadian Abroad at 16:02