What if my partners don't like my mug rugs? What if they wish I had made something different? Too much thinking going on here! And due to that I suddenly had a brain wave that I would make another mug rug today - and give them an alternative that they might prefer. I've posted photos on the swap page on Fickr and if either says the word then they can have this mug rug instead. 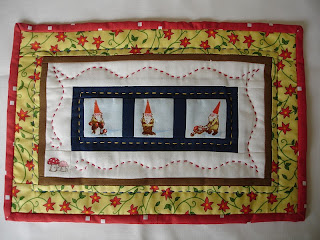 I had a little play with some of my Heather Ross gnomes. Framed them up in a dark blue, tried to pick out some of the colours used in the gnomes for the other fabrics and then got stitching with the perle cotton. 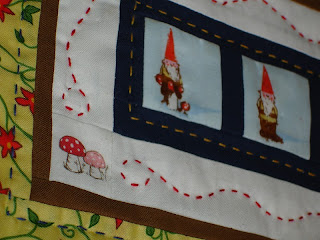 And that, other than the usual necessities of life, is what took up my day today. I do hope that one of my partners decides they want this one because that would make the last minute panic worth while.

I forgot to say that I received a Goodie Swap parcel on Monday but there was so much going on that posting about it here was wiped clear from my mind. I have not opened it because it was sent well before the posting dates, and a bit like on Christmas morning, I wanted to be opening my Goodies the same time as everyone else. And I am not to blog it yet, according to the rules, because then people would know for sure that this mug rug was not for them. It is good to be left guessing to the last moment. That is part of the fun after all.

On to other swap matters. I am thrilled that I have people signed up for the Modern Christmas Tablerunner Swap. I cannot tell you how nervous I was doing that post yesterday and how sure I was going to be Billy-no-mates in it. Not only is there people signed up for it but seriously great people. Amazing quilters with great senses of humour. I feel like a 14 year old who has had a party and the cool girls showed up. How good is that?!! Won't you come and join us? Because I know you are one of the cool kids too!

I'll finish with the girls having a great time at a friend's house yesterday. They got to have a swim in the pool and by the looks of Helen it was an extremely relaxing time - 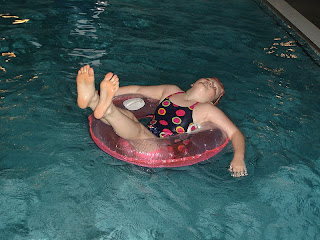 But in all honesty it was the toy that Emily was playing in that made me wish I had brought my swim suit too. 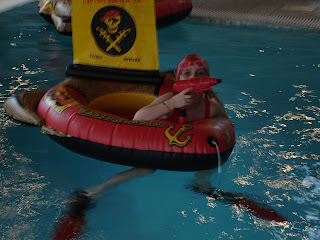 It was a pirate boat that you could sit in, using your feet to propel yourself, with a built in water pistol for waging battle. I think next time we are invited for a swim I will have to have a go at that!

Susan
Posted by Canadian Abroad at 19:40