Contrary to popular belief, the savage beast in this house is not himself but myself in a temper. Hard to imagine I know, but it does happen at times. This weekend was one of those times. Himself helped his mother out of a jam by inviting her and her unexpected house guests for Sunday lunch here - without consulting me. He did this while I was at Tesco doing the weekend grocery shop, for four people not nine. I had plans for the weekend involving berry picking, Vintage Harvest Festivals, my family and maybe even some sewing. They were shot to hell.

I was not amused!

My sewing room is also the dining room. To be able to feed nine people in there involves removing all my sewing gear. Not like with family where you can slide some of it into corners, but like with guests where it all has to go. Every. Last. Scrap! Himself saw his life pass before his eyes I do believe. He must have because that would explain why he did the extra grocery shop today. And bought me wine. And took Emily to her dance class.

I have a dining room again. Hmmmfff! I have no sewing to show you. Double hmmmfff! This would all be one long rant if not for the post man and the generosity and joy that the lovely blogging world brings forth. The post man and his wonderful deliveries soothed this savage beast.

First I opened an envelope that proved to be from Lynne. Back before the FoQ she challenged anyone attending to take photos of her best buddies there and to post them on Flickr, which I duly did. I did it because it was fun. I didn't expect anything in return but Lynne, in her generosity, told those of us who did meet her challenge that she was posting out 'a little something to each of us'. Uh, a little something! I beg to disagree because this is a big something. I got all this in the post from Lynne today and I am truly gobsmacked and grateful. 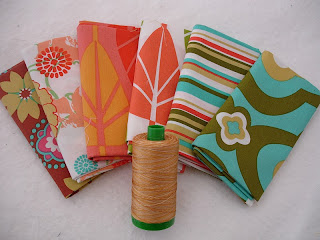 These Anthologie Fabrics are gorgeous as the heavier weight variegated Aurifil thread. All I can say to Lynne is a most sincere thank you. Hope I can make something with these to do them justice. I am in love with the leaf print, third from left!

The other envelope I received contained more bee blocks, this time from Fiona, who makes the most wonderfully colourful creations (and I secretly idolise her for it). I think it was her ability to use perle so well that got me wanting to try it. If you have never looked at Fiona's blog then get on over there and find out what I am talking about, please!

After opening the post I must have been more human because my family decided that we should move the outing to the Vintage Harvest Festival to this afternoon rather than miss out completely due to tomorrow's change of plans. I am glad to announce that we had a brilliant time. But I am not going to tell you about it now. I'll try and find the time to tell you tomorrow. Obviously there won't be any sewing photos so you will have to make do with a tractor or two!

I leave you with two possible layouts for my hexies. The first photo was my original plan, but once I laid it out I wasn't so sure. The second photo is the alternative. Could you please proffer some opinions? You've got plenty of time before I will have a chance to sew them together on Monday. Thanks!

So, while today started out with a general rant and a rage from me, and I still can't believe I had to put away all my sewing stuff - we did manage to squeeze in a little fun and laughter. We are going to have fish and chips now. (You didn't think I was doing to produce a top range home cooked meal tonight too, did you?!!) And we are going to sit and watch the newly released fourth Pirates of the Caribbean film. Snuggle up and enjoy it together. Better end to the day then start.

Susan
Posted by Canadian Abroad at 18:09