I had plans for today. Part of those plans involved feeding my family well and the rest of those plans involved sewing in the free moments between. But a chance remark made by himself threw all my carefully laid plans more than a bit out. I haven't touched my machine today and the closest I got to fabric was shifting it so that we could actually sit at the dining room table to eat like a civilised family.

What was that passing remark? Simple. - 'Look at all the elderberries that are ripe down at the end of the garden, girls.' Uh-huh, that was all it took. Because then they asked what you could make with elderberries, and Emily got on the computer and looked up recipes, and before I knew it the girls were outside gathering in as many berries as they could.

Making jam had not been in my plan anywhere. I have never made jam. We don't use a lot of jam. Emily detests toast, or so she claims. Helen would rather have a bowl of cereal, or pancakes, or french toast, or a fry up. So no jam consumed at breakfast time here. That was neither here nor there. Before I knew it my two mini monsters were busy stripping the berries from those clusters they grow in and measuring until they had four pints. 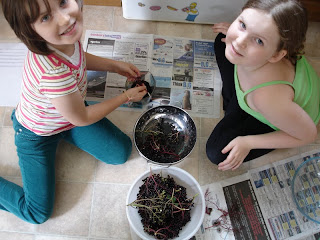 They even measured in the six cups of sugar. (Six cups!!) 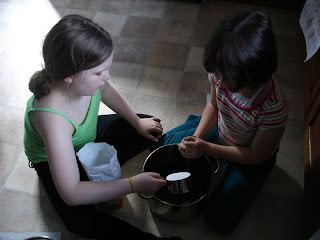 You can guess who did the rest. The standing over the pan and bringing it to a very - very - slow boil. Who stirred frequently, as Emily pointed out conscientiously the recipe told you to in the instructions. Who put it in the jars - which was a very messy job in itself. Because I have never made jam before I do not own a jam funnel. Why would I? 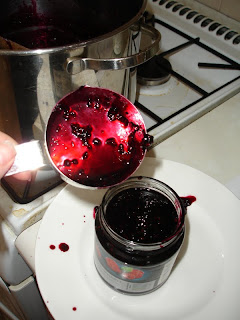 And muggins here put them in boiling water for ten minutes to make them sterile so our jam will be good for a whole year. A whole year! Isn't that wonderful. Because I tried a little taste and, guess what, I don't really like it. Too sweet for my taste. Helen came to me, quietly and out of hearing of Emily, and told me she wasn't that keen either.

So I spent the best part of the day making jam that most likely will not be eaten. Joy! Anyone want a jar of Elderberry Jam? I have six. I am sure we can spare some! 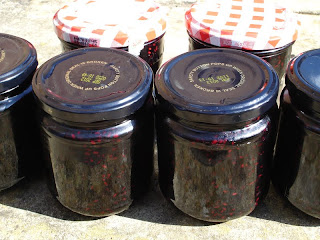 On the bright side, the confit of duck legs was a smash hit. And Helen instructed her dad on how to  make an apple crumble. Please note - he does not make a very good student! But the crumble was delicious. So we are a well  fed family. We just have a bit of overstock in the jam department.

Susan
Posted by Canadian Abroad at 16:53