I have been having a brilliant time in the Brit Bee. So glad I gathered my courage together and put my name down for this bee quickly, because there are only twelve of us in it. If you didn't act quickly you lost out. It is the inaugural Brit Bee. Laura Jane set it up within days of Lynne setting up Brit Quilt. Laura Jane had never been a mama before so she thought she would have a gentle start, so twelve was the limit. I am one of the lucky few.

I consider myself lucky because I am in with a group of very talented women and there are days I wonder if they know the truth - about me not having a clue so often. But I don't regret signing up for this bee one bit because I have met and made friends with the most brilliant, funny, supportive women you could imagine. The fact that I am the oldest is kind of weird, but we won't go there!

And now it is September, and I own September. The fabric has been cut, sorted, packaged and posted. I hope they have it by now because I am about to let the cat out of the bag and tell  you what I decided on for my blocks.

If I hadn't won the Go! Baby I was planning to go for improvised blocks, but I did win and that influences my decision of what to ask for. I received three dies with my baby. I had requested equilateral triangles, hexies and drunkard's path. I might tease a little but, honestly, there was no chance I was going to make them all piece hexies into 12.5" blocks for me. Especially as half of them are already doing hexies in Lynne's hexalong.

No, I went for Drunkard's Path. And I cut contentedly as the Go! makes it so easy. 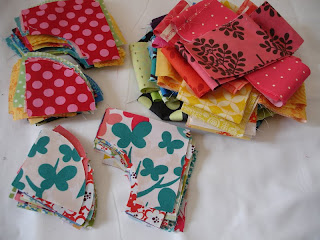 Curves! I went for curves. I have tried out sewing these little doohickeys together and it is easier than I thought it would be. Thank goodness - I would have felt dead guilty making them take on a task which was a pain in the a**e. I used over thirty different fabrics and a charm pack of Just Wing It for these blocks. I based the fabrics I chose on the colours found in the charm pack (for the most part). I want my blocks to be saturated with colour.

I have asked the bee ladies to piece four Drunkard's Path squares together and surround them with the sashing provided. How they arrange the squares is up to them. The combinations are not endless, but they are up to them.

And that, my friends, is what I have asked for my bee blocks. I have been thinking of a name for this future quilt, and as the block uses the Drunkard's Path I thought I would play on that name and that Alcoholics in a Box might do. What do you think?

Susan
Posted by Canadian Abroad at 14:34