I am linking this post to Quiltstory for Fabric Tuesday. Have not linked in a few weeks due to the summer holidays taking precedent and it is time to get back in the swing of things. I'm off to read some posts from other people who are linked too.

What a day! I came close to tossing my dummy out the pram, or just plain losing the will to live. But here we are, posting late (for me) and I can see the light at the end of the tunnel. That light is the one that is on in the school, waiting for my children to arrive tomorrow morning. I love my girls, but I'll be shoving them through the door tomorrow morning with a grin on my face!

We had to go into town this morning. I was required to renew my drivers licence. Apparently once it is ten years old you need a new photo. Pain in the a**e? Most certainly but (and I mean this most sincerely) I so needed a  new photograph! The last photo I looked like a prisoner who had just been given the death sentence. It was grim! Easily explained when I tell you I was 38, in the early stages of my second pregnancy and my less than one year old was a goat. She could climb just about anything in the house and sleep was a superfluous activity. I looked like crap! So new photo it is. I may look ten years older but surely it can't be as bad as the last one. Can it?!

While we were in town Emily suddenly remembered the school bag I had made her (to her design I might add) that just did not work as a school bag. 'So, Mummy, why don't we pop into the charity shop and find another pair of jeans and you can make me another bag to use tomorrow?' Why not indeed?!! It was at this point that my day went down hill quickly. But I will return to the subject of book bag shortly.

On our return home I found that no one had pieced my Across the Sea QAL blocks while we were out and that they were still taking up a large percentage of the floor space. I considered returning to the computer and taking notes about Hadley's and Sarah's design suggestions, but realised deep down that they were only messing with my head (right ladies?). I had a quick shuffle around and came up with this - 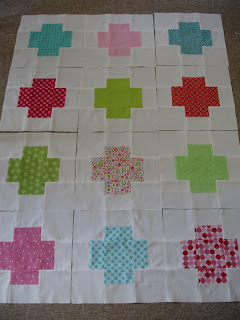 Almost as quickly, I sewed them together, before I could change my mind again. Too much pondering can be a problem some days when you do not have the time for it, so I nipped it in the bud sharpish. While the girls made sushi for tomorrow's school lunch I did this - 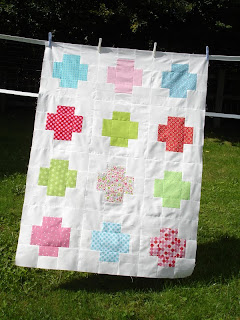 I thought I was all caught up on the Across the Seas QAL until I read some posts this morning and everyone is supposed to be moving onto their borders now. Yeah, yeah, soon!

Then there was the school bag. I knew it wasn't going to be as easy as before when I took the time to read the label on the jeans, something that I should have done in the shop. 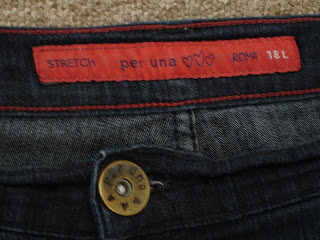 Stretch! Arrghhh! I don't do stretch - well, I do in the trousers I wear but not with the stuff I make. Never. Not stretch, not shiny slippery stuff, not velvet or anything that doesn't say 100% cotton - that's my general rule. And (a little plug for M&S) these things were made really well. The bits where I needed to pick out stitches when I was deconstructing the jeans were not giving up without a fight.

Eventually I got on with the sewing. And I sewed my little heart out. I pinned for England to keep the stretchy bits from getting the better of me. I pushed my machine to its limit and beyond. When I was sewing through very thick layers of denim like when attaching the shoulder straps my machine was not happy. It didn't sound right. I worried. I may still be a bit worried, but I will give it a wee clean tomorrow, a drop of oil and speak nice to it. Hopefully that will see it through this hiccup.

All this happy sewing was done to the cheerful sound of my children in the background. Highlight of their various conversations? Had to be - 'Oh yeah, well your armpits stink!' Lovely little ladies, aren't they?!

Due to the fact that I did not use a pattern for these school bags I had no instructions to review. Which might explain why, after I sewed in the lining, I found the shoulder strap to be firmly esconced inside the lining and completely useless. Needless to say I had stitched and back stitched several times to make sure that strap was very secure. The seam ripper earned its keep.

I sewed the thing back together again. And I still got it wrong! Honest to God, if I only had a brain! So I ripped out stitches, again. And I sewed - again. Is it any wonder my machine was getting a little unhappy? Four hours after I began we had a new school bag. I don't like it! Secretly I do, but I am so pissed off at it, and me, right now that I could sling the thing in the bin.


It's a good thing for the girls that there was enough leftover curry in the fridge to feed them for dinner because I have no idea what they were going to have otherwise. Food preparation got forgotten somewhere in the day. But, new uniforms are all laid out and ready for the morning. Book bags too! 9am tomorrow I will be doing a happy dance.

Susan
Posted by Canadian Abroad at 19:13