The Story of Tips

Yesterday I introduced you to Tips. There was some speculation whether something dire had happened to either Sprinkles or Slush, and Tips was a replacement. No. There was also speculation that Tips was a rodent of a kind other than a gerbil. No! So why did we increase the resident gerbil population?

Emily started talking about getting a friend for Sprinkles and Slush last week. What with her being ill and all I don't think I shot the idea down well enough. I did, however, explain that gerbils are territorial little animals and it is very difficult to introduce a new gerbil to ones that are already established in a gerbilarium.

Instead the girls asked their dad if they could get some new fish for our aquarium. This in itself poses problems as our rather large catfish tend to think new introductions are lunch rather than fellow fish tank friends. But in the scheme of things new fish was a better idea than a new gerbil. Off they went on Saturday.

Needless to say Emily scuttled straight over to the rodent cages in the pet shop. And Emily fell in love - with Tips. Fish were bought. Gerbil treats were bought. They left the shop without said gerbil. Emily fell apart emotionally. Himself gave in, and home they came with Tips.

What followed involved hysteria on the part of the girls. Sprinkles and Slush gave Tips a welcome worthy of gang warfare. It was not pretty apparently. I did not witness it. Tips had been removed to safety by the time I arrived on the scene.

So there we were. One mother trying desperately not to say, 'I told you so!' Two girls upset, and one husband informing me that the pet shop had never said anything when told the new gerbil would be joining two others. (Himself hadn't been in on the conversation where I told the girls what would most likely happen.)

Back they went to the pet shop on Sunday. Oh, said the pet shop person, yesterday's salesperson should never have sold you the gerbil knowing it was to join two others. It has always lived on its own so will always have to live on its own. Our mistake.

Cue big apologies on their part. And the deal of a lifetime of a new gerbilarium, food, bedding and treats for the grand sum of £20.

So we are now the proud owners to three gerbils, in two gerbilariums, in a house that barely has room for all the crap in it already. But Emily is still in love with Tips, and she has parents that are too soft for their own good. 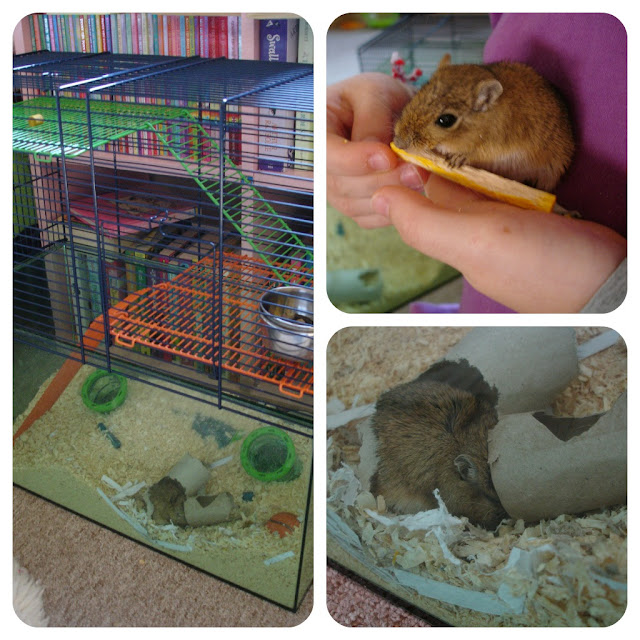 Admittedly, even I like Tips, in a 'she's a rodent and don't make me touch her' sort of way. She is the easiest of the three for being held. And looks ever so sweet in her favourite sleeping positions, which are either with her head stuck in an empty toilet roll tube (as seen above) or in her food dish.

And that is why we now have another gerbil.

Susan
Posted by Canadian Abroad at 09:23