Having made my wonky star quilt about a year and a half ago, I haven't really revisited these lovely blocks since. But Emily was Miss October in the Modern Stitching Bee and she chose two wonky star blocks.

I made the blocks yesterday, which pleases me as it gets me back on track for almost being on schedule with my bee blocks. It took me ages to make these blocks though. Not because they were difficult. They were a joy to make. Only my brain wasn't in full functioning mode.

You see, I didn't much sleep the night before. I was restless and finally decided to come downstairs and have a little read and try to get to sleep again after that. It was all going well. I had my read, felt suitably sleepy and set my book aside in favour of slumber. Only as I was about to drift off in the dark of the sitting room, I heard a sound.

Flipping gerbils, thought I, I will have to move the cage. But as I lay there it occurred to me that the cages were in the dining room. It really irritated me that they could be so noisy that it was going to affect my ability to go back to sleep.

I turned on the light, registered the thought that indeed there were no gerbil cages in the room. And the sound came loud and clear again. WTF! It was in the sitting room! And it was a distinct gerbil sound! (I've looked it up to get you the proper description of the sound - "When alarmed or excited, gerbils will make a rhythmic thumping sound with their hind feet.")

I went round to the cages to ascertain just who the escapee was and discovered that one of my children had left the door open in Tips' cage. Oh yippee! I suppose it could have been worse as the other cage would have meant I had two gerbils to round up instead of one.

So there I was, shaking a little food bowl and calling to Tips like some demented fool at 3:30am. It took me a while to get hold of that little bugger. I was very wide awake after that. And I kept hearing Rhonda telling me to just hit it with a frying pan. (Don't ask!)

That, my friends, was why I was so tired making these blocks. Considering the above, I think they came out quite well. 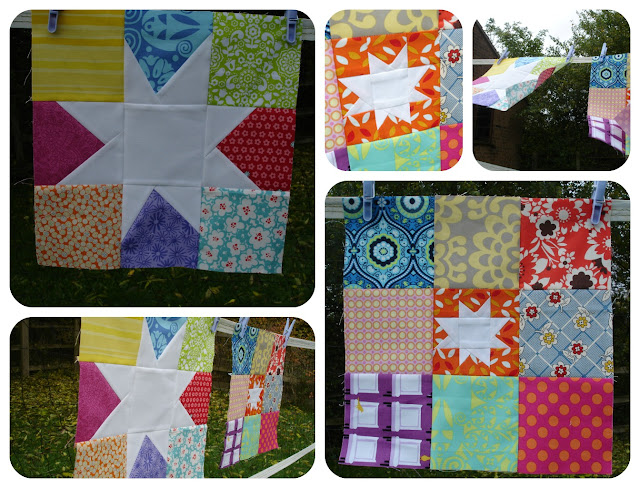