CLUNK is Not a Happy Sound!

'Clunk' is most certainly not a happy sound, indeed! Because that is exactly the sound my sewing machine made right before it stopped working. (Sob!) There I was, happy in my own little world, piecing fabric and 'Clunk'! Everything on the machine still goes on doing what it looks like it is supposed to do only the thread is not sewing. It isn't catching the bobbin thread underneath.


Yes, there is thread in the bobbin! I did check. I cleaned, and oiled, and did a copious amount of begging, but to no avail. I then got online, found the nearest service dealer and off I went as quick as the speed limit would allow me. (I can't get another ticket - not allowed to do another driver's awareness course for another two and a half years!)


And to add insult to injury, just as I was packing up the machine into its carry case I had this thought about it being rather dark - and it had been so sunny. Yup! My laundry was getting rained on. Oh please, what did I do to deserve that?


But all is not lost. I did make good headway turning my wonky stars into matching 9" blocks -

I will obviously have to make more stars as well as even I can figure out that there is not much of a quilt or a layout with fifteen 9" squares. What I have to figure out is how many more stars? And how much of a border - and what the border will be?


But with a broken machine I am left languishing. I guess I can go out to the garage tomorrow and dig around until I find my old Singer - which isn't one of those really old ones that people use because they are such dependable work horses. No, mine is a relatively cheap, light weight plastic one that used to annoy me in any number of ways which I no longer remember because as soon as I got my Bernina I pushed that Singer right out of my mind. On the other hand, it is a machine and if mice haven't eaten its cables then it is most likely the closest thing I have to sew on. I'll see how I feel after a (hopefully) good sleep.


Now you would be left thinking that today was all doom and gloom with what I have written so far. But far from it. Because today I got some post. Remember I told you I won something? Well Annabella at Life's Rich Pattern had a giveaway. And I won!! The amazing things she is sending me are arriving in two different parcels and today the first one arrived. Courtesy of Annabella, I have officially joined the bandwagon - 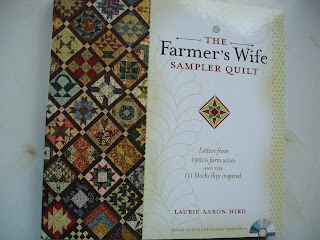 I think there are over 550 people who have joined the quilt-a-long and are on the Flickr site. Well, one more is about to add her name. I had been debating whether or not to do it because I have never done a quilt-a-long. But as more and more photos began appearing on people's blogs of these lovely little blocks I started getting intrigued. You start seeing so many possibilities in ways you could combine them.


Seeing as how I have won the book it is now a done deal. I am another Farmer's Wife - though having had a good look at the Flickr site I think I may be a girlfriend or mistress. Those are the people who have signed up but are not committing themselves to the full 111 blocks. Not sure if I have the staying power for all 111. Something else is bound to snatch my attention away at some point.


So all is not bad today. I have a book to read. Pages to mark as must do blocks. I can always make myself a needle book by hand if I am feeling lost without my machine. And I can sort fabric, looking at how I want to make those little Farmer's Wives blocks. I am sure I can keep myself entertained. If all else fails, I can make cake - and then eat it.

Susan
Posted by Canadian Abroad at 16:57