Today we had old friends come and hang out for the day. It was really nice because we don't see them nearly as much as we wish we could. Schedules, distance and petrol prices all contrive to keep visits from happening. But today was lovely. (And if she stops by the blog and reads this - Sue, thanks for making the trip up to see us!)

So there hasn't been a lot happening on the sewing front, but there has been a little.

I received the fabric from Miss June for the Brit Bee and it is lovely. Some wonderful Dream On. We will be doing the Disappearing 9 Patch block and are welcome to sneak a bit of our own fabric if we so choose. So I laid out four different fat quarters with some of the charm squares so see if any of them actually worked with the Dream On. I know which one I am favouring but was wondering if you had an opinion too. What do you think? 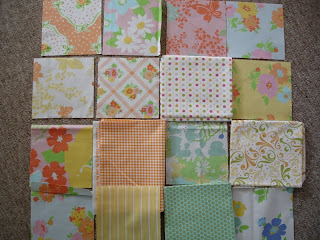 Maybe none of these fabrics work, and maybe I will have a deeper dig through the old fabric stash later on. But I just thought you  might see something in one of these combos that I don't. Which ever one I do end up using I won't be able to tell  you until the end of the month when all the blocks have been received by Fiona - sorry.

I also had a few minutes to work on my Brit Swap mini quilt. I chose the backing fabric and pinned the layers together. I am not going to complain about pins this time because I would be pathetic if I did. It was a breeze and done in a matter of minutes. I like mini quilts! I thought the Tweet Tweet fabric by Moda was a very appropriate backing. 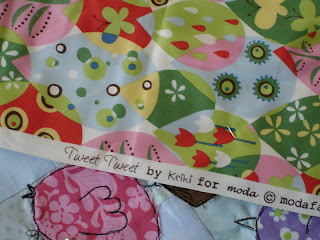 The binding fabric has only had a minimum amount of thought so far but I was wondering if you would like to proffer another opinion. Do you think that going with this black with green dots is a step too far? I was thinking in terms of making it look like a picture frame but am dithering. So more subjective opinions are being solicited. 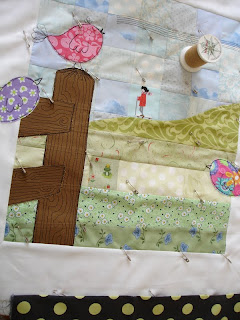 Surprisingly enough, I did manage to make a decision or two on my own today. I also added a few more 'things learned' to that learning curve of mine. Since I have never made a quilt like this before and it was something that evolved as I made it I didn't at any point put enough thought into how I was going to quilt it. I have now realised that it should have been quilted before the birds and fence went on! Living and learning here.

I tried to see what it would be like with some hand quilting. 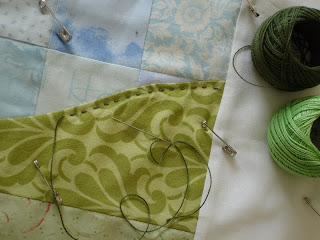 I pulled it out. I didn't think it suited the style of the rest of the quilt. So I tried to machine stitch it instead. I have a lot of thread ends to sew in but this is what I managed so far - 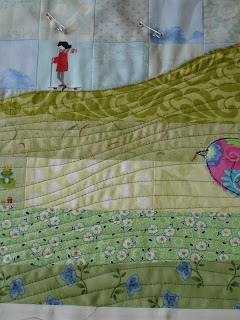 I think if I had cottoned on to the idea of quilting before the applique got put on then I might have done something very different but as it is only a lesson I can apply to my next mini applique quilt (whenever that may be) this way of quilting will have to do for now. I just hope my secret swap partner likes it.

And that is it. That is all I have to report. Sunny days, sandwiches, crisps, veggies and friends - that was way more important.

Susan
Posted by Canadian Abroad at 17:15