Have you all seen the contest over at Intrepid Thread to build a colour palette based on a picture and upload it to Flickr? The premise being that you think a bundle would be nice in the colours in your palette. The winner will receive a FQ bundle based on their palette. You need to use the palette building link they have on their blog post and it isn't as easy as I thought it would be. Play-Crafts tends to find the browns and the muted shades more than I would have liked, or maybe my eye is not as good as I thought it was in finding the predominant colours in a photo. That would be a much more likely scenario.

I went on Google and tried all sorts of photos before I decided on this one as my entry into the contest. 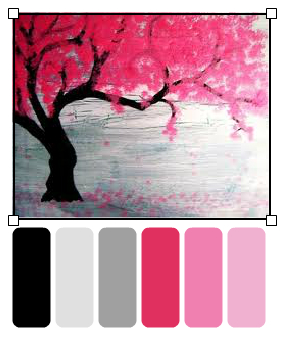 Why not go and see what you can come up with?

Meanwhile, as it rains incessantly outside and I manage to get little done inside, I thought I would show you the cushion that Emily made the other day. She had a little help from me only in appliquéing the heart and closing the gap with hand stitching after she had stuff the cushion. It measures about 9.5" square as she used two layer cake squares in the making of it.

She quilted is using fmq, stippling and making little looping hearts. Then she embroidered the little eyes and moustache on one of the circles on the back - which I think is absolutely inspired. (But I am her mother.)

She made the cushion for a friend of ours. It went of to its new home, along with the HR cushion I made, and has been received today. I didn't want to let on that My Precious was being rehomed as it had to be a total surprise. It was. Both cushions are already dearly loved which was just the outcome we hoped for.