So What Was I Afraid Of?

When I did my bee block for Miss April in the Brit Bee - Jo, I did a few hexies to form the requested circle in the block. To do so I had to have a stab at English paper piecing. Honestly, I didn't want to do it really. Not the bee block, the whole paper thing. I have had a mental block about it for just about forever. I admired what other people accomplished but thought to each their own.

Seeing as how the Royal Mail is holding onto my sewing machine oil for a little longer, today was a hand sewing day. I started the third hoop for the Sample Swap but then decided I would like to try something new.

I printed off a couple of sheets of diamond graph paper. A few minutes playing scissors and I had the diamonds I needed. Not much longer and I had fabric cut and needle and thread in hand. 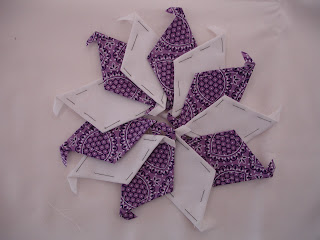 And I formed those diamonds into a large hexie. Feeling rather pleased with myself I cut up another piece of paper into diamonds and made another one. 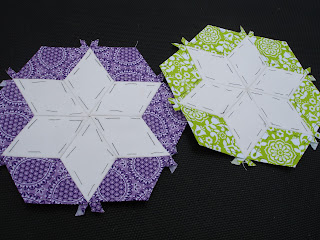 I am already picturing how I would like to hand quilt these blocks. Fortunately, I am also aware of my character flaws. Primarily procrastination and lack of long term attention to any one project. Let's just put the stars down as a WIP to put onto the list of the next quarter of the FAL. They will get done when they get done. But I still rather like them.

Susan
Posted by Canadian Abroad at 14:50