Living Up To Lynne's Challenge

Most of you will know that Lynne - Lily's Quilts - challenged those of us attending the Festival of Quilts to take photos of four booths. Since I have no problem whipping out the camera to attest to the fact that I was there, here are the photos requested. 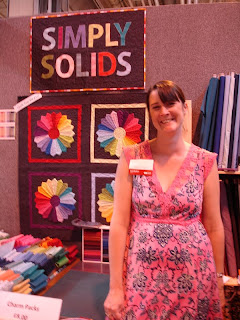 First up was Mandy from Simply Solids. Mandy was absolutely lovely, and also helped pick out a number of solids for me as I have them in mind to use in my Brit Bee blocks. She seemed to be having the time of her life at the show and was already talking about next year. 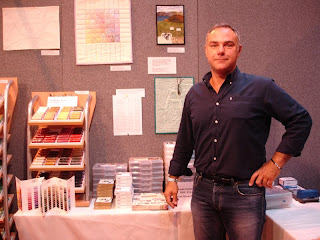 The actual Mr. Aurifil was not in attendance when Nicky and I were at the booth so I can not attest to you whether he is actually as good looking as rumour has it. Shame! We got Mr' Aurifil Junior instead. I did buy some thread to try it out though. 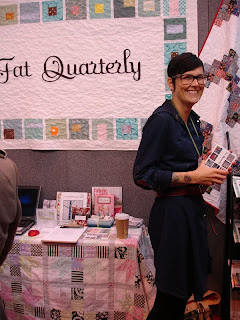 Katy, of I'm a Ginger Monkey, was manning the Fat Quarterly booth with humour and good cheer, unfazed by people wielding cameras. 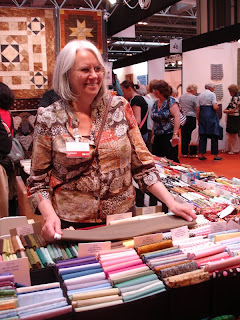 Ann, from Quiltessential, claimed to have no idea what Nicky and I were talking about when we asked to take her photo for Lynne - but she wasn't too surprised either! More fabric bought at this booth.

So there you have it. Just four of the many, many wonderful booths that populated the festival. I really hope that Lynne is slathering on the sun screen because she might be a wee bit jealous that we got to the show but I am dead jealous of her basking in hot sunshine with an amazing looking pool (if her hexie photo was anything to go by).

My laundry mountain is now a mole hill, the cupboards that were bare are no longer and huge amounts of groceries have been unpacked, I am being commanded to join the other three and go sailing. Blogging time is being cut into. So unfair! More photos of the show - eventually!

Posted by Canadian Abroad at 15:40

Email ThisBlogThis!Share to TwitterShare to FacebookShare to Pinterest
Labels: Festival of Quilts