I have realised lately that I sound just like a mother. The fact that I am a mother probably helps, but the things coming out of my mouth more than confirm it. When I was in Newcastle with the girls it was reaching a peak. You can hear me in the shops, can't you? 'How much?! I'm not paying £25 pounds for that!'. Yup, I am now one of them. It just might scare me more than anyone else.

One of the things I refused to purchase for Helen was a new school bag. Because she wanted bags that no longer can be bought at Tesco half price for £7.99 and are adorned with either kittens are carton figures. If I refused to buy her one then it was obvious I was going to have to make one. So we went to the charity shop yesterday. And bought the biggest pair of jeans they had for sale! 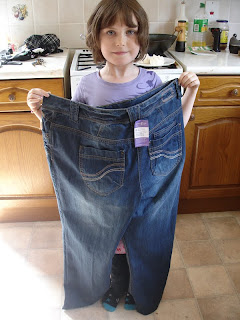 And then I went about deconstructing them. 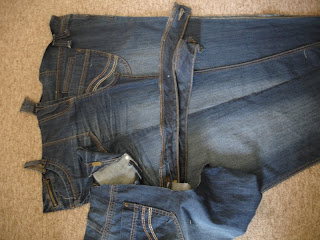 This was going to be the basis for making school bags. I wanted demin because making nice little quilted bags for my girls for school would be like giving a WWF wrestler a soft toy to play with. The bags would last minutes, and the first time they dragged them across the playground by the straps I would be done for child abuse!

I didn't have a pattern. Are you surprised? But I thought since I had made several of Ayumi's wonderful little fabric baskets I was well and truly prepared.  Surprisingly enough, I was. Just goes to show that Ayumi writes such good tutorials that you can transfer the knowledge learned into other, different projects.

The first step I did looks very similar to the fabric baskets, only on a larger scale. 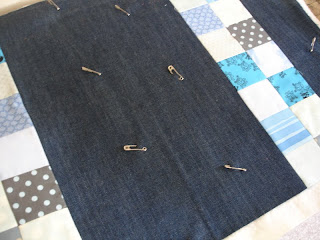 The large piece of denim will form the bottom of the bag and then there are two panels of scrappy squares on either side. It is topped off by  more denim. That is all lightly quilted to some wadding. 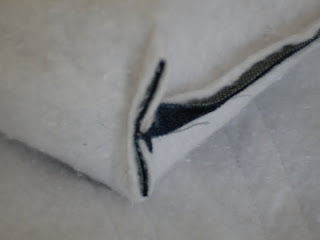 I lopped off the corners, but not as much as I would a fabric basket. Just enough to make it roomier for putting books in. 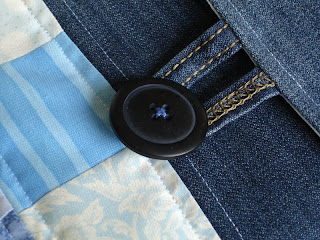 I added a flap for rainy days. I used one of the belt loops to form the button loop. It worked a charm. (I'm really pleased with this wee bit of innovation.) And I used the waist band as the shoulder strap. There will be a little fraying from where I cut it free of the trousers but there shouldn't be too much, nor should it last for long. 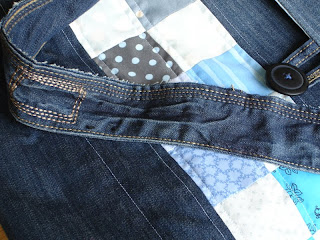 Helen chose the blue fabric theme. Which worked for me as I had a great big chunk of backing fabric which never got used for the intended quilt. I don't really like it because it is not a particularly soft cotton. Perfect for lining a bag with then. 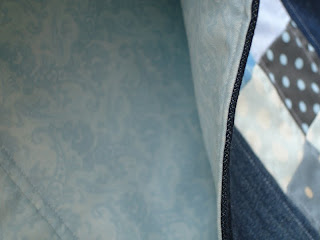 I didn't get too ambitious with inside pockets or anything like that. Mostly because Helen wanted me to remove the pockets from the jeans and put them inside. But the pockets were riveted on and I could get her to understand that this caused problems. She argued. I compromised. No pockets!

But she is very happy with the finish article. And that is what counts. 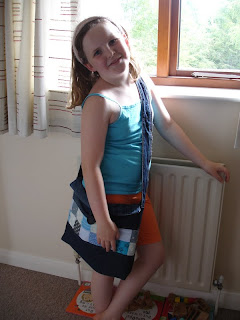 Now, just have to do one for Emily. Only she wants hers different. Longer and narrower. Typical! For once I actually wrote down the basic dimensions and they are not needed. Oh well, still another jeans leg waiting to be chopped up. Not bad for a charity shop buy and some scraps.

Susan
Posted by Canadian Abroad at 15:11