I Love It When I am Wrong

First I had to baste. Oh yay! Obviously I like basting so much that I thought I would do it twice. I spent ages smoothing the backing, carefully placing the wadding on top and then putting the quilt top onto those layers. And then I pinned for England. Once I was done I flipped it over and inspected the back. It looked like it had been basted by a three year old!

Thankfully attempt number two went better than the first one. 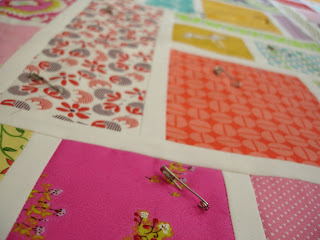 I chose to quilt in a big stipple so that the quilt would be nice and snuggly, and to match it up with it's partner in crime on the sofa when it is finished. (The Across the Seas is quilted in a big stipple too.) The bonus to this is that it doesn't take as long as just about any other type of quilting. And I even remembered to change my bobbin when I was by an edge instead of running out of thread when I was smack dab in the middle of the quilt. This was a huge break through in thinking for me!

Obviously all the positive thoughts that were missing on Wednesday are back in force today!

Did you notice something else? There is a touch of blue sky in that there photo! Quick, look before it is gone again. Ooops! Too late. It's raining again - never mind.

I haven't linked up with Shay for Favourite Things Friday for absolutely ages. But today I can honestly say I have a whole load of favourite things. Pieced quilt backings that make me happy. Blue skies, no matter how briefly they stuck around. Sewing without running out of thread. And colour. I love all the colour in this quilt.

Now if I haven't put you completely off with all this happy stuff, have a brilliant weekend. I'll be doing some binding when I can fit it in between entertaining the in-laws, doing all the usual crap and life in general.

Susan
Posted by Canadian Abroad at 11:29