Going with the theory that I can think too much at times, I find it easier at other times to sew rather than ponder myself into a complete muddle. Stick my head in the sand pile of fabric and ignore the little voice at the back of my head telling me to stop while I am ahead. I had an idea when I was making my pouch for Mouthy Stitches. Then Di made her fantastic pouch for the swap which had some similarities to what I wanted to do. Today was the day to see if the variation I had in mind would work.

I wanted to use some of the Melody Miller coffee pots that I got from Annie at The Village Haberdashery. And I wanted my pouch to have this shape - 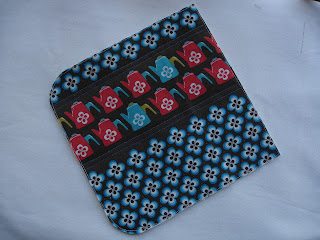 Easy. All it is, is a 8.5" square with two corners rounded off using a juice glass as a template. It got a bit tricky when I wanted to sew the zipper on. Because I wanted it to go round three sides of the pouch. 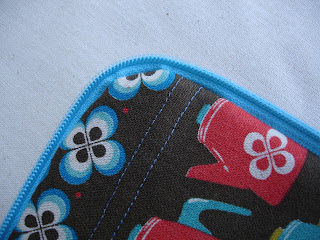 As the zip I had was a 22" one it was easier to unzip it and just use my fingers to hold the layers in place and sew very, very slowly round those corners. It wasn't so difficult with the first side of the pouch, as seen above. But once that was on things were slightly more complicated - for me at least. 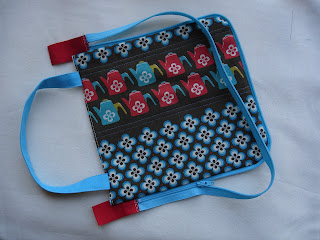 There were just so many 'bits' to get in the way when sewing the zipper onto the second half of the pouch. There was some unpicking involved. Not as much as I would have thought, if I had bothered to think about it beforehand. You could tell I was really concentrating though, because I forgot to take one photo of the process after that!

We skip directly to the finish at this point - 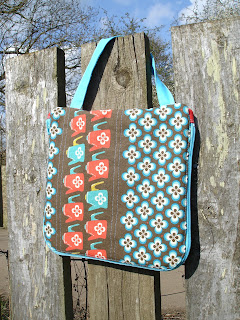 I thought a pouch like this might be useful opening up round three sides to access my sewing things, if I was ever inclined to take them somewhere.

And that's what I did today. Besides the usual drudgery of course. A day wouldn't be complete without a little drudgery! I wanted to try making this pouch as I thought it might be an idea for what I could make for the Sample Swap at the Retreat. I think I now have to have a sleep and think about whether or not I want to sew zippers like this a minimum of four more times.

Because I have a couple of more ideas that might work for the swap as well. No idea how to make them but I am sure I could muddle through if I set my mind to it. Today I took it one step at a time and didn't think forward to the next step much at all. I decided that it couldn't be very different from making a 'normal' pouch.

Susan
Posted by Canadian Abroad at 16:10