If the truth be told, once I knew that I was going to join in the fun at the Farmer's Wife Quilt-a-Long I started hanging around the Flickr group and seeing what fabrics people were using, etc. Before the book landed on my hallway carpet I had a very good idea of what colourway I was going to go with. That was because I had already experimented and made a few blocks.

Well, I know technically I should have had the book first, but some of the blocks are easy to figure out. The maths are simple enough and I didn't do any blocks with anything more complicated than the odd HST or two. They all ended up the required 6.5" square. And I am pretty happy with most of them. I might redo a couple. I might not. When I have done a lot more then maybe I won't notice the ones that I am not so fond of so much. We shall see!

Here is what I have accomplished -

I believe it is quite obvious what my fabric choices are now. Each and every block I do will have green in it, and hopefully white too, and then I am delving into my scraps and putting as many different colours as I have in modern, bright fabrics - with smaller prints for the most part. I am trying to keep the blocks unified rather than going for a true scrappy look. I thought then it might compliment my newly made cushions and be a throw for our ugly sofa.

So that is it, my first seven Farmer's Wife blocks made. I would like to be making more. I just sat at the Singer and tried to finish turning the wonky stars into 9" blocks. I now remember vividly why I acquired such a hatred of that machine. It makes me want to scream. The feed dogs are useless. Too wide apart and ineffective so 1/4" seams are impossible, nor is starting sewing from the edge of the fabric. The needle just goes up and down, knotting the thread and the fabric goes nowhere. An absolute waste of space! So, no more sewing today then.

But again, it is not all doom and gloom. Because the sewing shop rang this morning and he found time to look at my machine already. Bless that man, I think I love him. He said he has the thread catching again, but that things are pretty clogged up behind the scenes in the bits I can't get at myself, and the tension needs a little work (I knew that but worked around it) and after a (not full) service it will be mine again. All for £50 plus VAT. Yippee! Less £££s than I thought it would be too. I can pick it up tomorrow. Happy, happy me!

The only thing that the Singer did accomplish during its little excursion out of the garage was to assist me in Emily's card making endeavour for the fundraising Grow-a-Pound that is happening at the end of the school day today. She had already made a number of cards and sold them to the neighbours. But she didn't have many left to sell at school so using Karen's card as inspiration Emily cut up my tiniest scraps and I sewed and twenty cards later we had these - 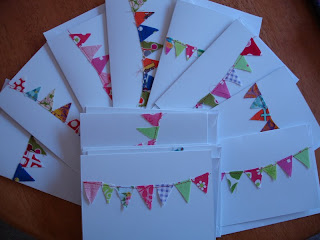 She plans on selling them for 50p each. I do hope that she succeeds as she is very excited. She has already made £8 so her growing of said pound is already a huge success. I won't say how much the supplies to make the cards cost!

Have a great weekend!