Today I Had a Mission

It is pretty obvious from the title of this blog that I am a Canadian who doesn't live in Canada. If you have read me before then you will know that I currently live smack dab in the middle of England. It's a good life and a happy life. But sometimes I hanker after things 'Canadian'. Dare I say that Halloween is one of those times of year that I sort of, maybe, wish that I was in North America.

If you grew up with Halloween then you are generally hooked for life. It was never a teenage, trouble making thing that some people tell me it is in England. Is was just darn good fun. I'm a mother. I want my girls to enjoy Halloween too. And they do, they absolutely love it. From the first time that I took them trick or treating and Emily's three year old self declared it 'The best thing ever!' to the present day.

Luckily the area we live has embraced it and most of their friends go trick or treating in the village with lots of houses welcoming them. We never go to houses that don't have some indication that the trick or treaters are welcome - pumpkins or decorations outside are usually a dead giveaway. This year the PTA is hosting a Halloween party tomorrow night as well.

So what is my problem, you may wonder? Pumpkins! In particular, pumpkins of a decent size. Anyone who has experienced Halloween in North America will know that pumpkins are everywhere, in every size, stacked outside farm shops and the like. Finding your perfect pumpkin each year is no different than finding your perfect Christmas tree in a couple of months time.


﻿
We went to buy a pumpkin yesterday. We were in Tesco. The 'large' pumpkins there were smaller than Emily's head. Not that Emily has an unusually small head but her head size is not the same as a large pumpkin! I refused to buy one. Unfortunately we went to two garden centres and there wasn't a pumpkin between them. So we went to the Coop where the girls said there were most definitely pumpkins. There were, but when I went to lift one puny specimen out to have a look - at this point getting a little desperate and less picky about size - my fingers sank into a rotting bit in a rather gross and off putting way. We did not buy one of their pumpkins!
Today I awoke with a mission. Pumpkins must be found. I would like to thank Sainsburys for not only coming through for us, but for actually providing pumpkins of a size that gladdened my Canadian heart. 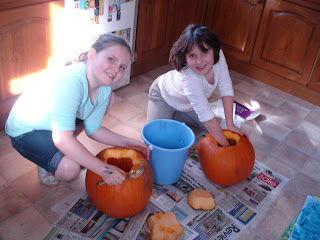 It also soothed the savage beasts that are my children. Having inducted them into the joys of Halloween at a very young age they couldn't face Halloween without a pumpkin either. Who knows where I might have ended up today in my quest if Sainsburys hadn't provided?!

﻿Pumpkins carved, MIL over for lunch as we hadn't seen her in absolutely ages, and it was eventually time to do some sewing. Woohoo! Well, the 'woohoo' held for a short while. I got out the recently purchased fusible fleece, read the instructions (please see photo) and got going with the iron on the wool setting. 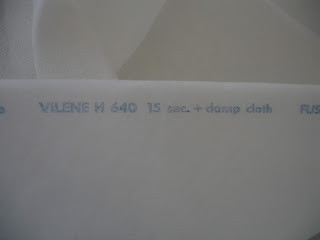 I cut, I layered, I covered all with a dampened tea towel and I got to work. 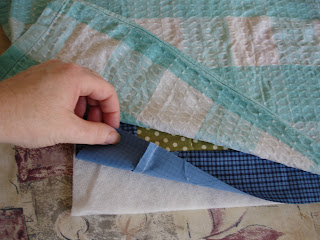 And it all did just what it was supposed to do. I did find it a little strange cutting the fleece to the same size as the cushion top but did this as I didn't particularly wish to have the fleece glued to my tea towel. Those of you who have used this stuff before - does this happen or can I merrily cut a little larger?
I then went about quilting without any backing fabric, as Lynne had suggested. It worked a charm and I had no problems at all. A quick stipple and it was done. Ready to finish with sewing on the cushion back. 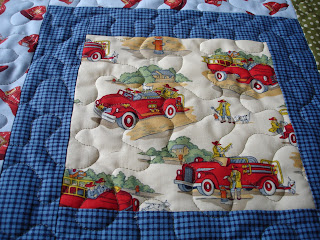 Great, thought I. And I went about doing it all over again with another cushion cover. I thought I would do the other firemen one as I already had the colour of thread I wanted on the machine. I would change from a stipple to a loopy FMQ. Easy peasy and quick, thought I. (Too much thinking was going on and you just know it had to go wrong!) 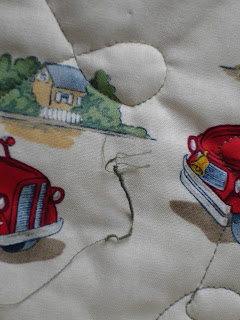 First the thread broke several times. You can see one of those times in the bottom right hand corner of the photo. Then my thread did this to me! See that clump. It was the end of the spool, but I have never had a spool of thread do this to me before, at any point in using it. It made my machine make funny noises - which always makes my heart lurch! And I don't have any more of that colour, there is still a third more of the cushion cover to quilt, I am annoyed, I am worried that if I go back to my machine it will start making 'those noises' again.

So I walked away and wrote this post instead. Seemed the most sensible option. I am going to ignore that cushion cover. Pretend it didn't happen. Maybe go try some straight line quilting, if I get back in the mood. I am not going to try picking out all those stitches today. So not in the mood for that!

If you have stopped by from Ellison Lane Quilts through Jennifer's Spotlight feature on me today - Hi! - and yes, this is fairly typical of one of my days. Unpredictable, seldom goes to plan, but I have fun. Most of the time - when my thread isn't doing the above to me. Hope you enjoyed your visit.

Susan
Posted by Canadian Abroad at 17:20