I didn't know what to call the post today. My instincts were to go with the quite rude, because the first crafty product I played with today was this. 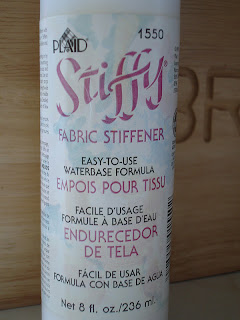 I mean, honestly, the post titles are just endless. But there are only so many strange searches that I want bringing people to the blog and I am a little freaked out that 'bare feet' is turning out to be quite popular. I do not wish to become the foot fetish queen. So all thoughts about stiffy jokes went out the window. I'll get to the whys and wherefores of 'Tears and Tantrums' in a minute.

I used the above mentioned product to soak a couple of the crocheted snowflakes in to test how they looked when pegged out and dried. I only did two because I only found a small spare box and that was all it would fit. I also went and found a ratty old towel (the kind that enters a marriage as part of the man's dowry) and placed it over the box, then got pinning. 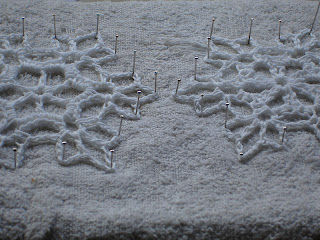 Hopefully by tomorrow I will have two frozen stiff snowflakes.

There wasn't a lot of crafty stuff done today. I turned all domestic and did the necessary duties. Blah! But it's done for another year. (I'm joking!!) I also got a craving for French Onion Soup which was supported by the realisation that I had managed to buy two large bags of onions in the past week. So I got cutting and pealing. This is where the tears came in copious amounts. Thinly slicing over a kilo of onions was hell. 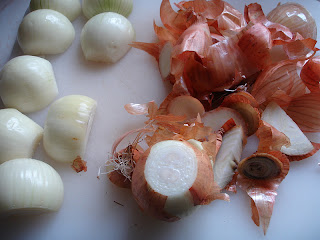 Then came the task of very slowly cooking them down so that they were meltingly sweet. This is my first time attempting to make French Onion Soup. It was pretty easy, but boy did it take time.

I would like to show you scrumptious photos of deep bowls of soup, slices of French bread on top and bubbling with melted Gruyere, but I can't. Because we haven't eaten it yet. I am waiting for himself to return home from the wilds of Hampshire tonight. I'll try and remember to take a photo but no promises!

So that leaves us with the tantrum part of the post title. It is a bit of an exaggeration but I have to say I was less than happy to hop in the shower this morning to find that the lovely man who safety checked our gas yesterday also left me without heat and hot water. The heat I can live without right now, but hot water no. Absolutely not! I am not a cold shower kind of girl. Lucky for me our landlord came round about lunch time and sorted it out. I no longer feel grotty and smelly. People won't mind standing beside me at school pick up (I hope).

I will finish with a little tease for my partner for the swap. I have officially started cutting fabric. I'll be testing the Go! and its new mat later on. Wish me luck! 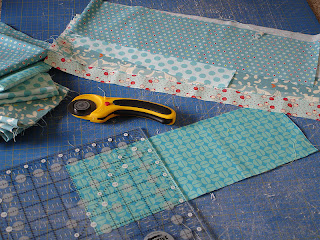 I am really looking forward to making a tablerunner for my partner. Especially now that I can focus and not worry about the other things I need doing.

Susan
Posted by Canadian Abroad at 15:07