Well, we did it, we survived the hustle and bustle of London and returned to the (blissfully) quiet countryside. We had an absolutely fantastic time but it was so good to come home and get a good night sleep. In London we stayed at the Royal National Hotel. Would I recommend it? Um, no, I wouldn't! In terms of convenience the location was brilliant, just off Russell Square and only a minute to walk to the Underground. In terms of ambiance, breakfast, and - most importantly - good double glazing it failed magnificently! We were on the sixth floor and it felt like we were sleeping right on the sidewalk by the traffic the window did so little to block out noise. Nor did I enjoy listening to the young Italian gentleman in the room next door until 2am the second night. Apparently he was not aware that others wished to be sleeping at this time. The night manager took him in hand eventually, thank goodness. (Not my doing, someone else complained.)

That is the only downside to our little jaunt. Everything else was wonderful. We crammed in lots, got great weather and loved everything we did. We arrived about lunch time on Monday and headed over to Kings Cross to collect my mum. After checking in at the hotel we went with Emily's request to go to the Sylvanian Family Shop. As she has been saving her money for this for almost a year it only seemed fair to let her go immediately. The Sylvanian Family Shop is a small trek out to Finsbury Park (yes, odd place to find it, I know) and a short ten minute walk from there.

That was Emily upon arrival. It is worth the trip to the shop just to see their faces when they went inside. 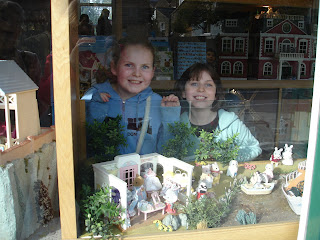 Then we just had to be really patient while they dithered because they only had so much money to spend but they wanted everything. Making a decision was tough!

﻿
﻿﻿That evening began one of my favourite parts of going to London and what I miss so much about living in a city. Food! Choice of restaurants! Monday night we went to Carluccio's. It was scrumptious. Who could argue with a plate full of pasta and seafood, redolent with garlic and chili? Certainly not me! Emily was tired after the main courses so I let the girls choose something from the deli for desert to have back in the hotel room.

Tuesday we awoke to a clear blue sky and a mother/grandmother telling us that she was treating us to a trip on the London Eye. Yippee! We headed over there right after breakfast to avoid undue crowds and it was the right move. Emily came around the corner from Waterloo Station, and stopped dead when she saw The Eye.

'Wow!' was quickly followed by 'Wow! Wow!!' It was a perfect reaction. Of course Helen was an old hand since I took her when she was four so she tried to be was more cool about it.

Our next stop was Trafalgar Square to go to the National Gallery.
﻿﻿ ﻿﻿The National Gallery was a hit with the girls. (Mum and I already knew we loved it.) It was so cool to see their faces when they spotted paintings that they loved, especially the Van Gogh's they so wanted to see. It was all going swimmingly well until Helen viewed The Execution of Lady Jane Grey by Paul Delaroche. That was just a wee bit too realistic for her. It is an amazing painting, and due to this very fact manages to portray the anguish extremely well. It was time to leave the gallery!


We needed time out at the hotel after that feast. Later on we had a very light dinner of starters in a Greek restaurant before we headed to the theatre to see Wicked. No photos in the theatre as my camera is not up to that kind of space when a flash is required as well. Suffice to say the musical was absolutely fabulous and the girls loved it as much as mum and I did. It was perfectly summed up by Emily (she seems to be the one to quote from this trip) when it came to the interval and she asked if it was over. When I told her it wasn't she just let out a heart felt 'Phew!' We didn't get back to the hotel until after 11pm so were exhausted, but a happy exhausted.
There was only one more place to visit in London the next morning to make the girls trip complete. A visit to Hamley's - unadulterated joy for the girls and an exercise in patience and the ability to say no repeatedly on my part.
And that was just about that. We went off to Yo! Sushi for lunch. Emily promised to keep herself in check. I should have known better. As soon as her eyes landed on the salmon sushi and the tempura prawns all self control went out the window. But it was a fitting ending to our few days away.

And now we are home. The weather is miserable but that is okay, seeing as how we were so lucky in London. Even yesterday when there were constant short sharp cloud bursts they only ever happened when we were on the Underground, in Hamley's or having lunch. We were very lucky. So the girls are still in their pyjamas though it is almost 2pm. I couldn't care less. It has just taken me forever to write this post what with all the photos and the continued problem of BT supplying an ever worsening Internet connection. It does not matter. Not today. Today we relax!