I was supposed to do a favour for a friend today. It involved some fabric and the Go! Baby. (Not for you Cindy, yours are done.) I used the Go! yesterday for some sewing I needed to do today, and things went wrong.

The cutting mat, which was showing definite signs of wear, went from not good to useless in a matter of minutes. I noticed that the minimal number of Drunkard's Path blocks I was cutting for myself were not cutting square at all. I was holding up the outer portion of the block and the lack of a 90 degree angle was obvious. I don't feel that I have used the Go! enough to warrant the cutting mat being useless so quickly. I cut 36 charm squares, stacked four to a cut, and I went from passable cuts in the beginning to disappointing by the end. The cutting mat started losing little bits of plastic and looks like this now
Do you have a Go! Baby and have you had the same experience. It seems I am going to have to buy cutting mats in bulk because I do enjoy the ease of cutting with them.

I used the charms I cut to make a quick quilt top today. Old friends of ours have just had their second child and it is a boy. I had the perfect fabric for a boy (which I obviously can not remember the name of suddenly because my mind is losing brain cells at the speed of light). 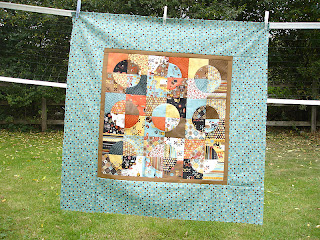 I'm rather pleased with the outcome considering I only had the one charm pack to play with. The outer border is from Java by Moda which I bought on sale ages ago and it seemed just about perfect for this. I have enough of it to use as the backing as well. 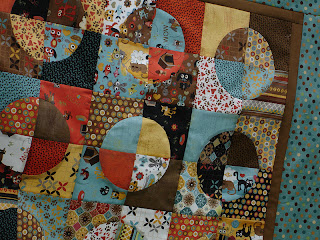 I then moved on to my DS Doll Quilt. I pieced a simple backing, using the equilateral triangles on either side of a strip of the white fabric and I intend to use that is my signature block. I am keeping the remaining back white as, quite frankly, I was at a loss of what to do otherwise. 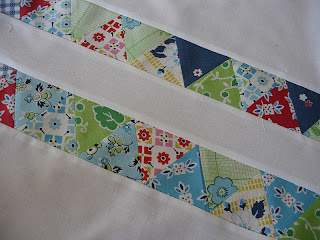 That doll quilt is now layered up and basted and awaiting me to come up with some ideas of how to quilt it. Suggestions welcome! 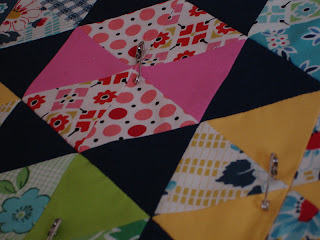 Tonight I have something to do which I think of as uniquely English, but that may be because it is nothing I ever had to consider before having children. The quest to get your child into a 'good school'. My girls go to a village primary school but we do not live in the catchment area - hence the daily school run. They go to that school because it is the school they attended before we moved to the Isle of Wight. Three house moves in three years and another change of school was too much upheaval and we tried to minimise it by returning them to their original school,

Unfortunately there were not any (reasonably priced) houses to rent within the village. We got the best house we could within a five mile radius. Where we live is not in the catchment for our high school of choice either. In fact our catchment area is the same as the one John went to high school in and as he considers his years in high school more in terms of survival than educational he is adamant that our girls do not attend school there. I tend to agree.

Which leads me to tonight, and the open house at the school of choice for us. The catchment school for their primary. There are two sides to every coin, and it is brilliant that this school got an outstanding evaluation last spring from Ofsted. It is considered one of the top high schools in the country apparently. As I said, brilliant! Only now everyone and their brother want their kid to attend this school and competition just increased hugely. Bugger!

We will go to the open house and be impressed and then hope beyond hope that the fact that Helen was attended a catchment school giving her a step up in the acceptance process will be enough to get her in. If not we have our wild card, which is that it has a specialised art department and accept a number of students on that basis. Helen's teachers consider her quite gifted in art. I think she is too, but I have the biased parent's opinion. We can apply for a place based on her art abilities if we fail to get her in the normal route.

And so starts the year of stress, and waiting, and not knowing for months and months. Is anyone else experiencing this? I believe that with our luck we will get her in and then end up having to relocate again at which point I would have to take to my bed!