Over a year ago I made a quilt. Then it disappeared from social media, and my life, completely. Why? Because I hid it under a pile of other stuff because something had happened that annoyed the hell out of me and I chose the ignore it and you don't have to do anything about it trick.

Well, I pulled it out of hiding. And I went over to my house, cut and attached a binding. Then brought it over to the house sitting house so I had something to work on. 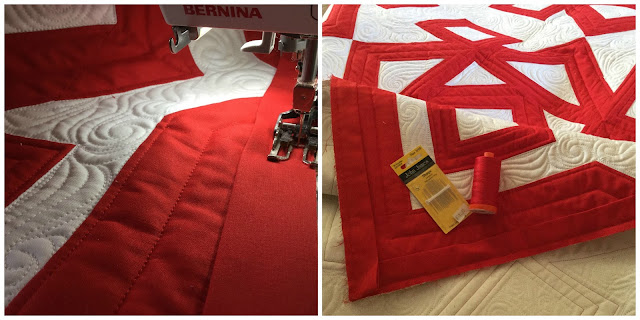 I'll tell the tale of what happened to it when I have it all finished. I'm over it now because in the scheme of things in life it isn't that big. Annoying, but not life changing. The binding is half sewn down now. It's a big quilt. My finger is sore. But I persevere. When I made up my mind to finish it I really meant that I wanted it done as soon as possible. And used as the Christmas quilt it was meant to be.

Susan
Posted by Canadian Abroad at 13:34