A Little Bit To Report

When Emily started feeling poorly on Thursday night I obviously made the decision to keep her home on Friday. As she wasn't a happy bunny I thought it best I ignore my plans to hoover - as you can imagine this was a difficult thing to do - and get some hand sewing under way so I could sit by her side. I had been kind of craving a new epp project to do anyway. 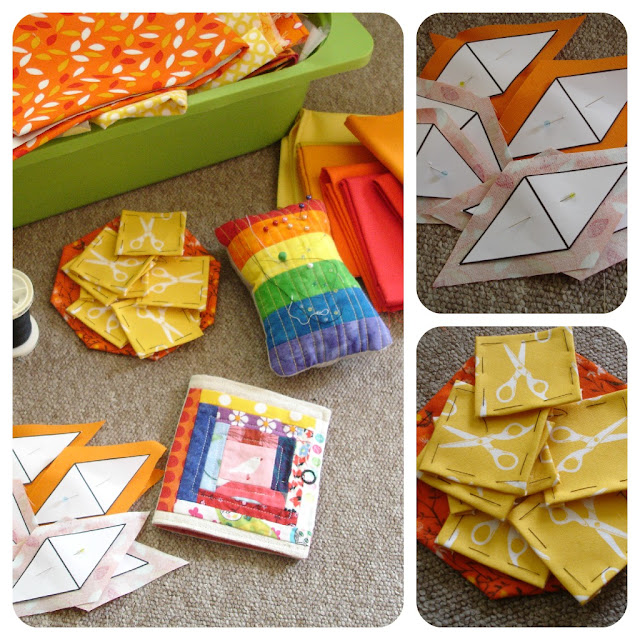 I cut and I tacked. Then I ended up accompanying Emily to the hospital. That night I asked Helen if she could put together a zippy pouch with the epp items in so I could do that while there. I wish I had cut and basted a lot more because then I would have a lot more to show now. As it is, I do rather like the block that I made with the bits I did have. I still need to turn it into a square block, because the future I have for it requires that, but this is what I accomplished so far. I am happy to be doing epp again because I once again am left with the impression that something I thought would be tedious and time consuming is fun and goes rather quickly.

When Emily checked into the hospital ward we realised that she did so without one single soft toy. Now I don't know about your's - if you have children - but  mine do not do anything without at least one of their favourite soft toys. The more stressful the situation the more the necessary the comfort the toy brings. I remedied this lack by nipping over to the Sainsburys that was near by and getting a new, special, take care of you in the hospital friend. He got named Basil.

On request, Helen packed up my epp for me. She also put some yarn and a crochet hook in the pouch. I was a happy hooker, and when the yarn ran out (one ball does not go far) I pulled it all out and did it over again. Eventually I decided to stick to the block I made and it became a blanket for Basil. He was doing such a good job of comforting Emily he deserved it.

And that is what I managed to make over the weekend.

Susan
Posted by Canadian Abroad at 15:33